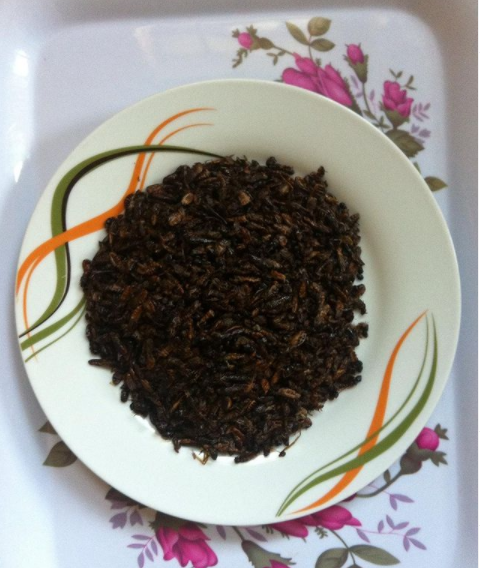 There is an interesting history behind the winged flying African termites or the white ants as they are popularly known in Uganda where they are a real delicacy.

When you walk in the streets of Uganda, flying African termites passes off as candy for many young kids; they love it to the core.

For Ugandans in general, these insects are a rich source of protein and not destructive as deemed by many in the rest of Africa.  Scientifically though, termites have been proven to have a higher protein content compared to red meat. White ants are also rich in fat.

World all over, there are 2,500 species of termites and Africa is home to 1,000 species. A termite colony has a queen whose sole mandate is reproduction and a king comes in handy in the fertilization process. There are thousands of termite workers in each colony who execute daily activities such as feeding the queen and building the mounds.

Interestingly, Ugandans have adopted unique methods of collecting termites using nests or digging deep beneath the anthills where the queen rests. Once the queen is captured, this is considered a real victory and the dish is astoundingly delicious.

The queen is huge, white in colour and segmented. Each segment is one-year-old and most of them have donkey years. You will find the queens with up to 20 segments meaning she is 20 years old. To get to her, it takes a specialized village man to dig the queen out for a fee.

Usually, termites are collected during migration at the beginning of the rainy season in Central, West and South Africa where they swarm. The collection involves the use of nets that are hung around lamps to lure the white ants (termites). Once the light shines, they head to the direction it is emitted from and onto the net.

Another method used in the collection of termites involves the use of water on termite moulds during the dry season. This triggers them to migrate thinking the wet season is on.

Once they sprinkle water, drumbeats resembling the sound of raindrops hitting the ground starts as more water is sprinkled into the moulds triggering a migration. Once the termites start moving, they are directed to a path leading to a container where they are trapped and eaten raw though they are supposed to be cooked.

Nonetheless, flying African termites are the main delicacy during the wet season as the farms literally produce nothing. Once collected/harvested, they are washed and their wings removed. They are placed on a hot pan and some hot water is added and cooking goes on until all the water is gone. At this point, you add some oil or butter to the hot pan and fry then for a few minutes and they are ready.

Besides this edible species of African flying species, some other termite species are vital in the growth of fungi which digests cellulose while others are used as poultry feed.

In other instances, they are used to catch birds. Termite mounds also support the growth of mushrooms due to the existence of a rich fungus garden. This is also used for medicinal value, and construction of brick houses, pot making and as a fertilizer.

Pregnant women also crave termite soil, believably, it has some nutritional elements. Scientifically, it is known as geophagy.

In some traditions, termite mounds are used a burial site and have a spiritual connection with the other world. History has it that ancestors have a special place in these termite mounds the more the reason why a good number of oracles are set up in these places.