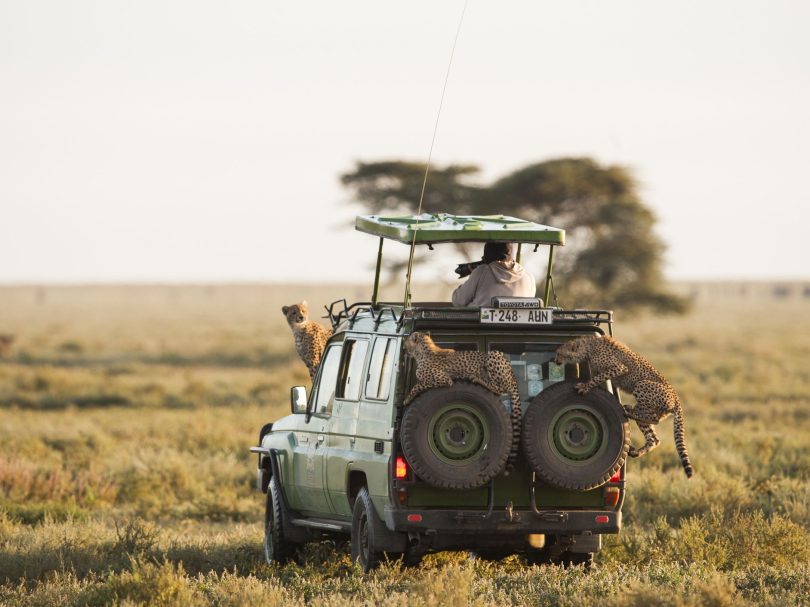 The Serengeti Tanzania safari is a tall tale of African wildlife delight. While you may not have been to Tanzania, you always were in the Serengeti when you watch the Wildebeest Migration.

You can also call it the Great Migration considered the seventh wonder of the world. Whatever you see happening is a crossover of wildebeest from Maasai Mara to the Serengeti, and vice versa.

With the mention of the migration, you already can tell how exciting the Serengeti Tanzania Safari is.

Serengeti National Park is one of the world’s renowned wildlife sanctuaries with thousands of game spread across the grass-ridden plains of the park. It is the oldest park in Tanzania, and one of the few UNESCO World Heritage sites.

It is part of Tanzania’s heritage that it has fought to preserve for years on end. Some of the world’s most iconic animals can be found here. 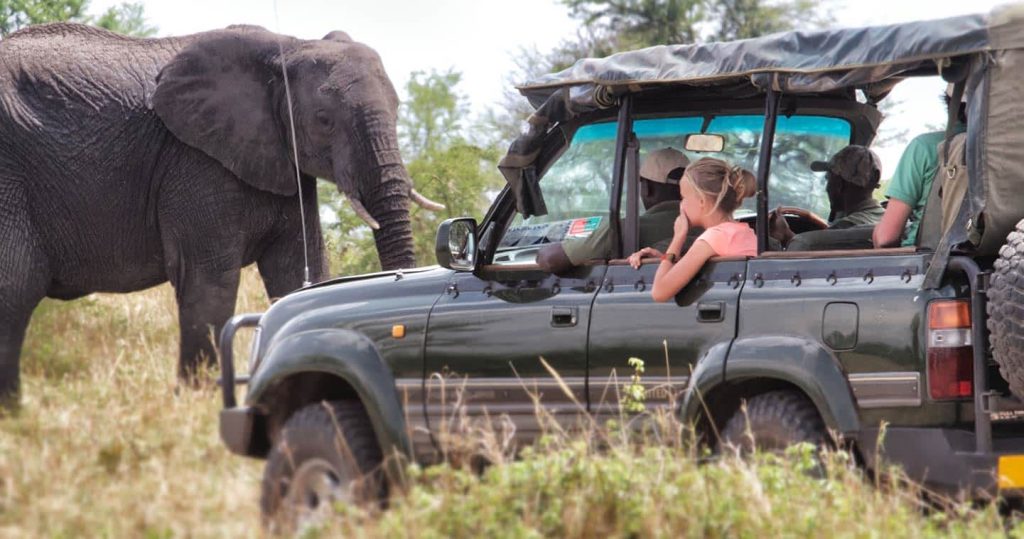 The Serengeti is an eye-candy not just for Tanzania but the world too as the heartbeat of the iconic wildebeest migration.

Serengeti National Park is divided into three sections with the Central/Southern Serengeti area being the most popular.

It is commonly referred to as Seronera Valley which is a savannah with acacia trees and enjoys a high population of wildlife. Most lodges in the Serengeti are located here.

How Much is a Serengeti Safari Tour?

Non-citizens pay per person, per day, to enter Serengeti National Park. It costs $60 USD per adult, $30 USD for children aged 5-16, and free for children under the age of 5.

Travellers who intend to stay for more than a week pay full price. However, tour companies negotiate a lower rate for their customers embarking on the famous Serengeti Tanzania Safari.

If you are wondering how much a one-week safari in the Serengeti cost, the answer is between $2,500 USD, and $7,500 USD. And this cost is for a luxurious Serengeti Tanzania Safari.

Besides, you still can visit the Serengeti with a smaller budget. There are packages dedicated to these travellers. Booking with a tour company is the best option because they take care of every safari detail, including permits for you.

Booking in advance also eliminates other expenses. However, do due diligence first on the tour company offering the services lest you lose your money and the beautiful Serengeti dream.

How Much Are Serengeti Park Fees?

The highest you will pay is $82 USD at the Kilimanjaro National Park, while it cost $70 USD for the Serengeti.

Here is a comprehensive breakdown of the charges for Serengeti, and other major national parks in Tanzania. 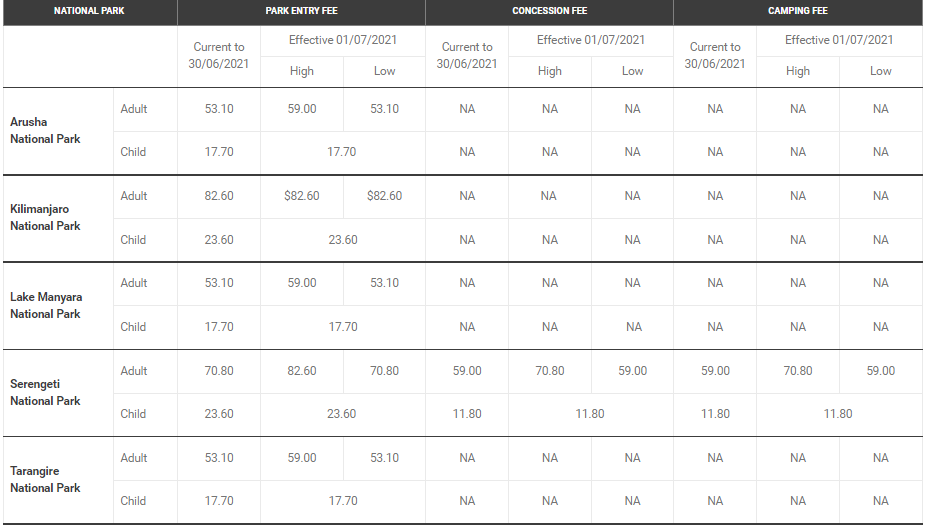 Is the Serengeti a Safari?

The Serengeti Tanzania safari is more than you bargain for. It gives you a different perspective of an African safari in East Africa known as the bedrock of the continent’s tourism.

Safaris in Tanzania’s Serengeti National Park are most enjoyable from the end of June through the end of August, or from January through March.

This is when the Wildebeest Migration is at its busiest, which is from the end of June through the beginning of August or early September. From January to mid-March is the calving season.

But the wildebeest migration remains the best of it all. There is an annual migration of animals in East Africa known as the Great Migration.

Every year, about 2 million grazers and their predators across the wide plains.

Known as the “Wildebeest Migration,” this is a vast movement of animals. The majority of this 800km-long animal migration is made up of around 1.5 million wildebeest. But there are also zebras, gazelles, and other antelopes making up the majority of the herd.

Predators of all kinds are attracted to the area. Tanzania’s Serengeti National Park and Kenya’s Masai Mara National Reserve serve as staging grounds for the annual great migration.

So famous is the Serengeti Safari tour that world celebrities visit for holiday, and big projects about African wildlife.

For instance, Oscar award-winning Hollywood actress Lupita Nyong’o, renowned actors Will Smith, and Idris Elba have been to Serengeti. 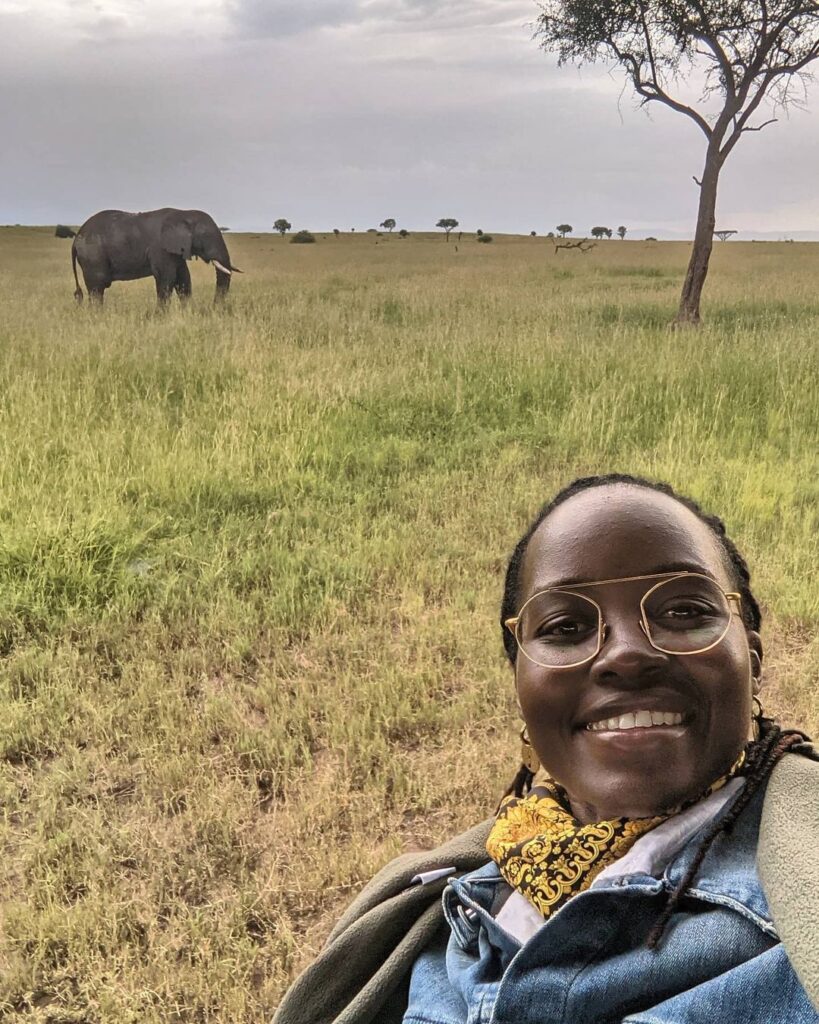 Lupita arrived in Kenya – her motherland – sometime in March 2021. But it was evident that she was on a travelling streak that took her to the Serengeti Tanzania safari.

Over the Easter weekend, Lupita crossed borders to experience life at the Serengeti National Park.  A bubbly Lupita was thrilled by life in the wild and did not hold back from posting an amazing image of her and a huge African elephant in the background.

Lupita was part of a project; ‘Serengeti’, a Discovery series where she played a huge role as a narrator. At least six episodes had been shot and edited at the time of her visit.

The famous blockbuster actor together with his wife Sabrina enjoyed the spoils of the Serengeti Tanzania safari in 2019.

They stayed at the prestigious Singita Serengeti House. In one of the posts, Sabrina expressed gratitude toward the staff at Singita for teaching them a portion of the work that they do in saving the biological system.

They didn’t give much about the different subtleties of their stay in the Serengeti National Park.

The unrivalled beauty of Serengeti welcomed American actor Will Smith and his wife Jada Pinkett in 2019.  He was shooting a documentary for Nat Geo.

You need not worry about the Serengeti Tanzania safari. Every mile you make in the vicinity of the park; your security remains top-notch.

Further, following park staff and your guide’s instructions will ensure your safety when visiting Serengeti National Park. When everyone on safari is there to observe animals in their native settings, wildlife attack incidents are extremely rare.