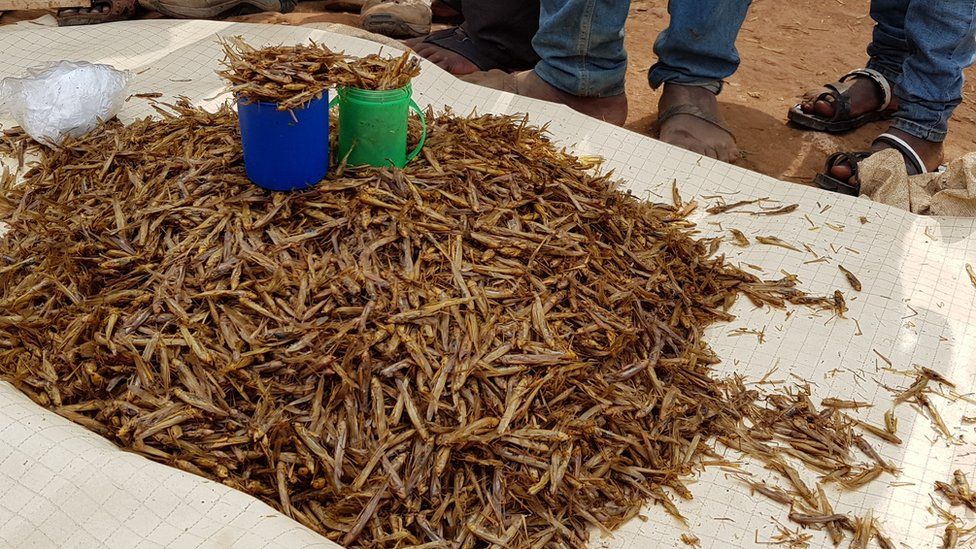 The rainy season in Uganda from March to May and October through to November animates the grasshopper eating culture in this East African Country more than anyone could ever imagine.

The love for grasshoppers in Uganda is immeasurable; it is a delicacy that has found a special place in the hearts of the Baganda people. Whether boiled or deep-fried, the love for it and taste never falters even for a minute.

Across the streets of Kampala, you find young men and women with woven baskets on their heads, some on the ground hawking fresh grasshoppers. Their wings and legs have been plucked off and what remains is this insect delicacy often prepared by deep-frying it and sprinkling some salt on it. it is crunchy in taste.

Also read: Inside Malawi’s Scintillating Cultural History Where Mice Are A Treasured Delicacy

For years, Uganda has been a heavy consumer of grasshoppers and its demand goes beyond Kampala. Other regions outside Kampala have a high demand for grasshoppers too.

Fried grasshopper in a market in Uganda. [Photo: BBC]

Masaka region in Uganda is credited with this tradition has been the first region where a grasshopper industry was set up in the formative years. It was a forested area that was turned into a farming land but this culture has since spread to other places in Uganda.

When the rains kick in, young men set out to the country’s stadium covered by lush grass where they set up their tools of the trade and begin their operation of catching grasshoppers in their thousands.

This operation involves the use of blindly bright light, and non-luminous objects to lure grasshoppers to the lights.

Qarish Katongole, one of the most sought grasshopper trappers told the BBC that they are in for it after a moment of heavy rains hitting the ground as the green grasshoppers and some slightly brown-coloured grasshoppers come out in large numbers.

“When the season starts, we watch the cycle of the moon and prepare. [They tend to come out at full moon]. We also keep hoping for rain. The larger numbers appear when it has rained,” remarked Katongole.

Katongole together with his colleagues traps the grasshoppers in barrels which they later sell to grasshopper vendors across Ugandan markets. 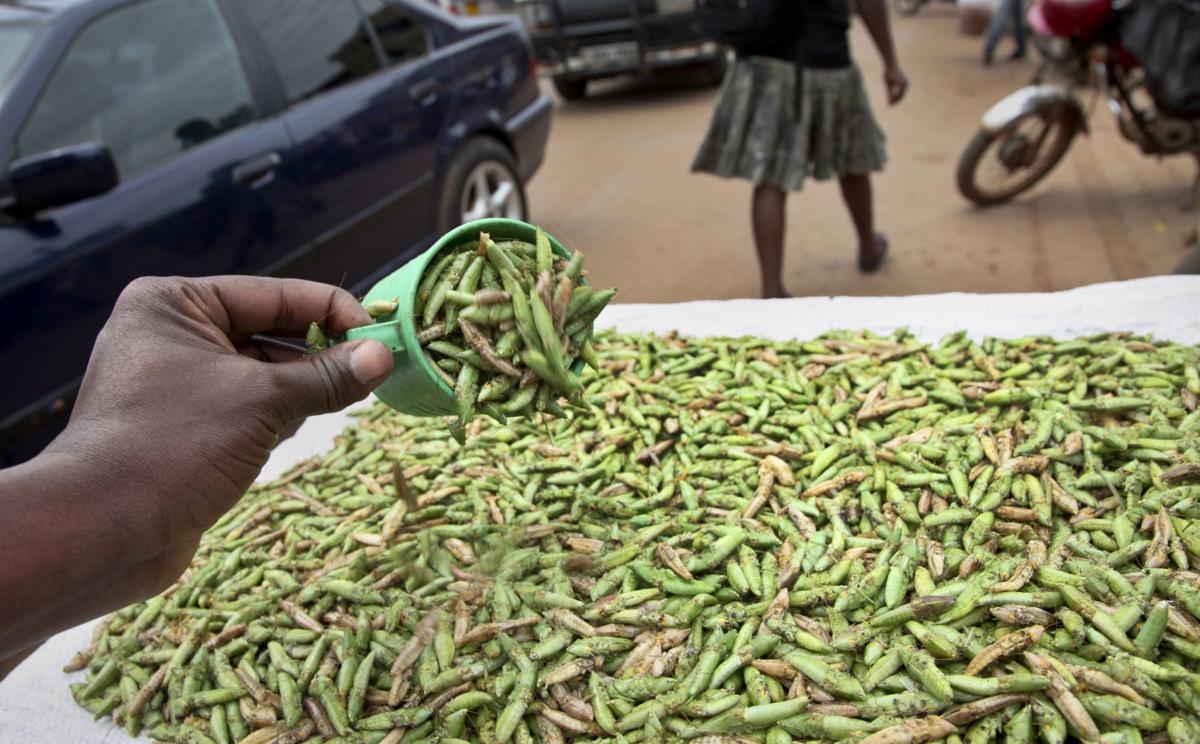 Once darkness sets in, the trappers burn fresh grass and the smoke makes the insects dizzy. They come out in a huff and hit unpainted iron sheets set up by the trappers and fall into barrels set below.

In the market, grasshopper vendors sell them either fresh or some of their parts – sounds weird but yes! – its legs and wings are plucked and sold separately. Freshly cooked grasshoppers are hawked across the streets of Kampala in baskets going for $0.27 for a tablespoonful. The business thrives during rush hour.

They are salty and crunchy with Uganda’s capital, being the largest market for grasshoppers. 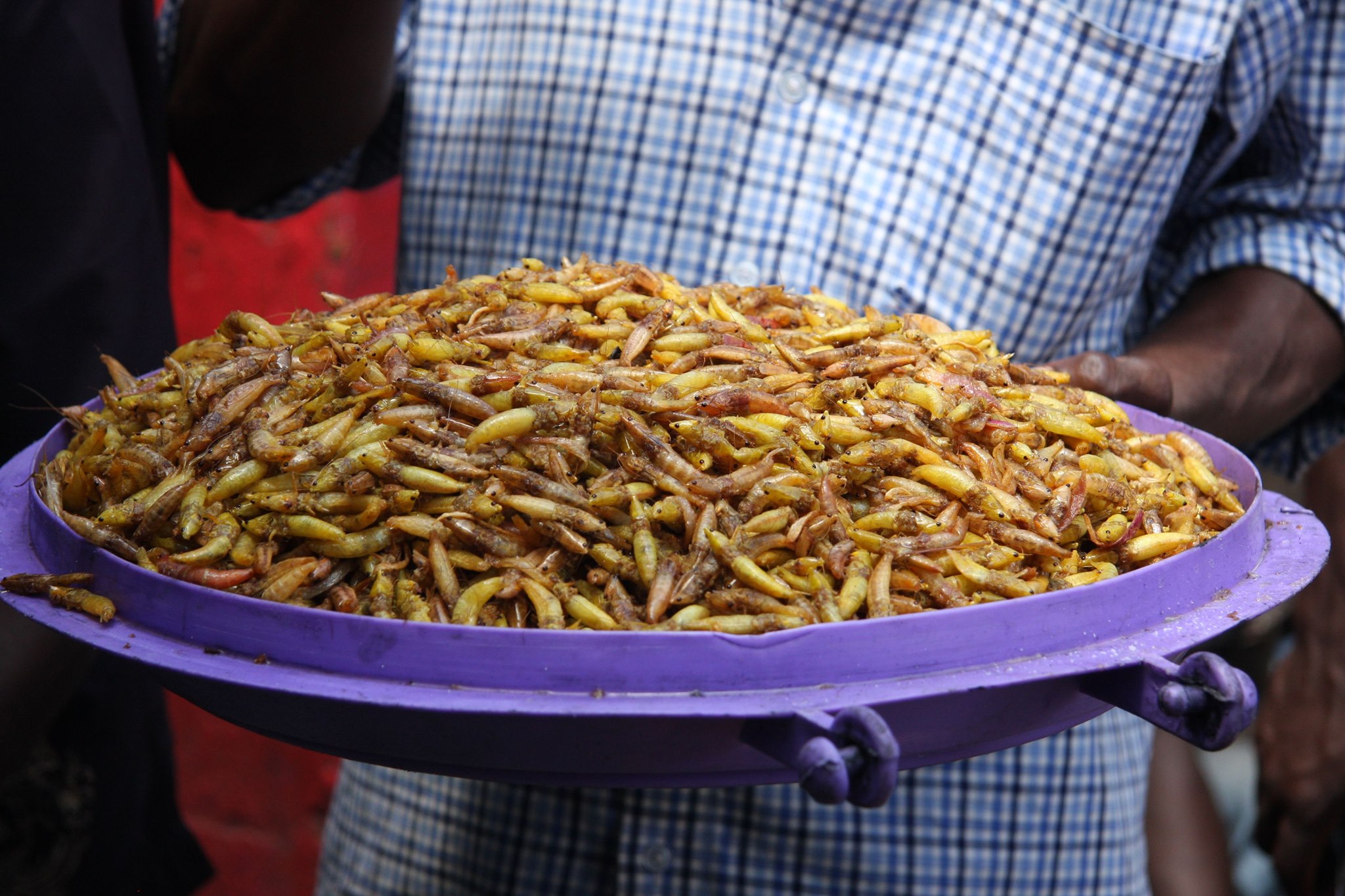 However, the uptake of grasshoppers in Uganda has drastically reduced over the last five years due to the loss of natural forests where grasshoppers breed.

Between 2010 and 2015, at least 46,000 hectares of land in Uganda which was forested was lost to development. The natural forest cover of tall grass and trees is not more which has affected the amount of grasshopper on sale.

Regions around Lake Victoria have remained the only breeding grounds for grasshoppers which is not enough to meet the demand.

The Food and Agriculture Organization (FAO), a branch of the UN has been advocating for increased intake of insects. FAO says that there is a lot to gain from feeding on insects, some of which have high protein content compared to other types of meat.

In 2013, FAO said that this is a proper way to boost nutrition among people.