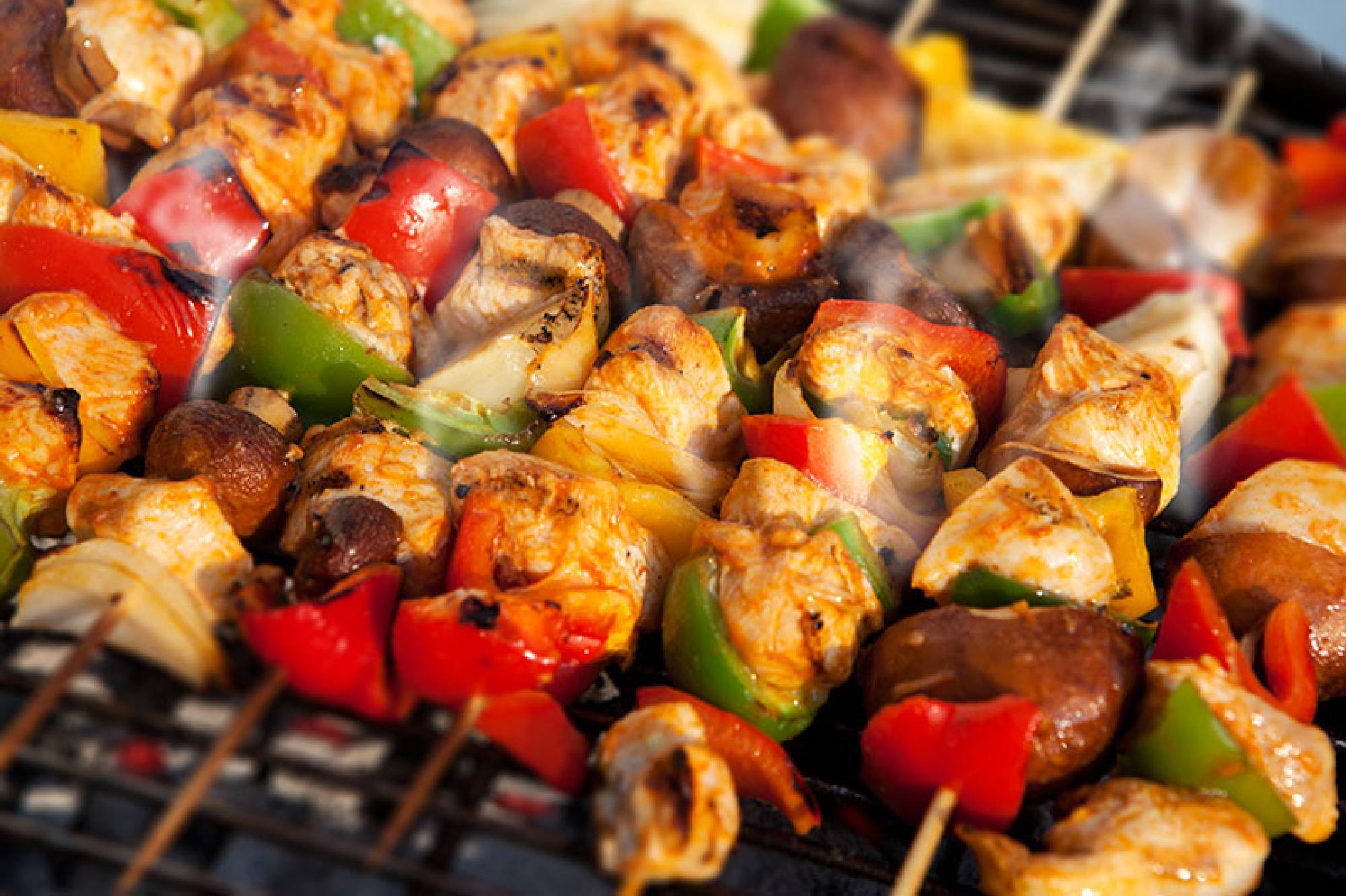 The North African culture is quite dynamic, with a lot of interesting things about its history, tourist sites and travel destinations but one thing stands out; the Moroccan cuisine. 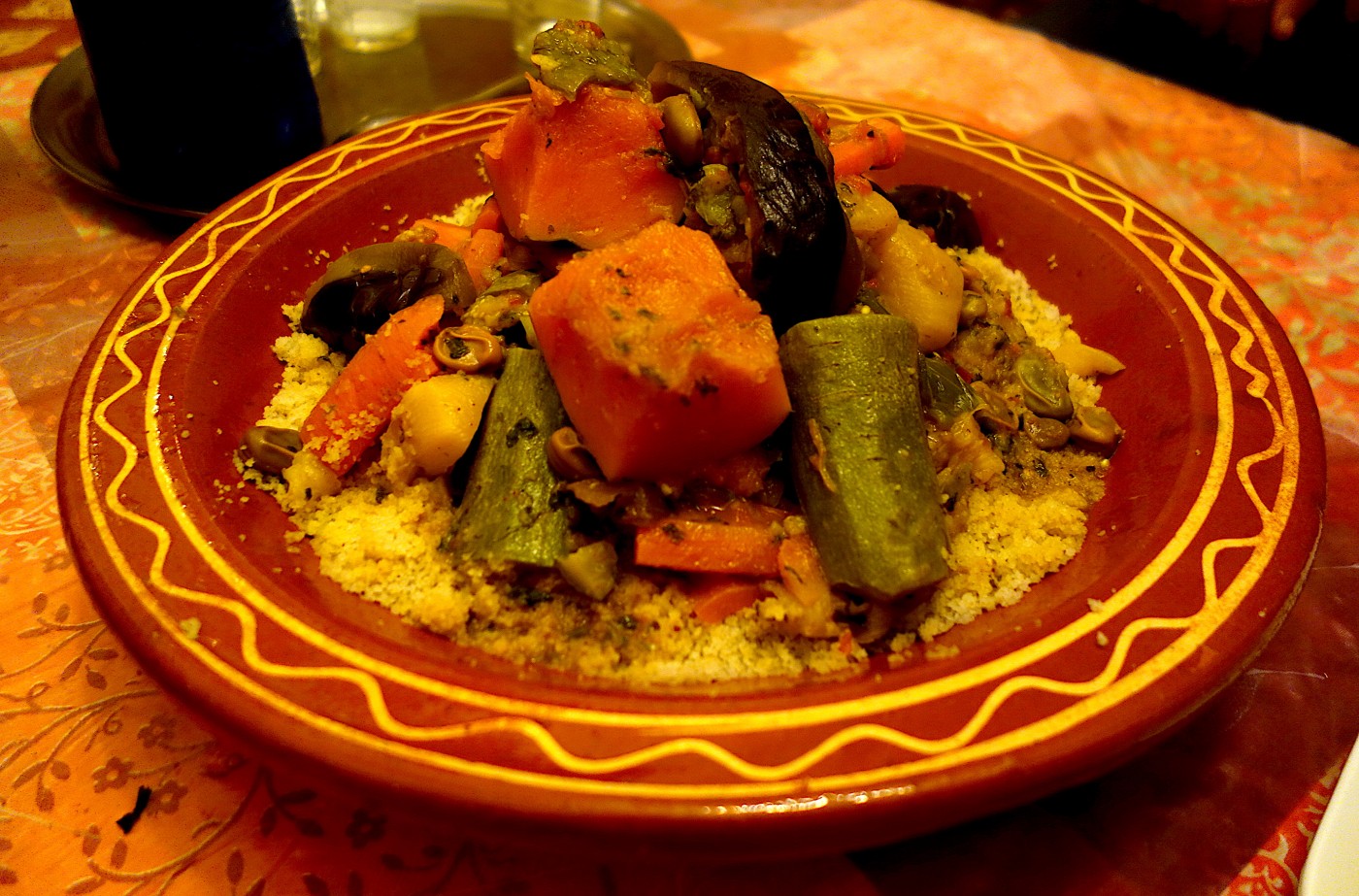 For a typical Moroccan family, this dish will be on their dining tables every week if not twice. It is prepared with seven types of vegetables together with meat (Mutton, beef or chicken). It is then served with grains. However, for the vegetarians, Couscous can still be prepared with caramelized onions and raisins.

Couscous is originally a Berber dish and for this reason, couscous is a staple dish in many North African countries 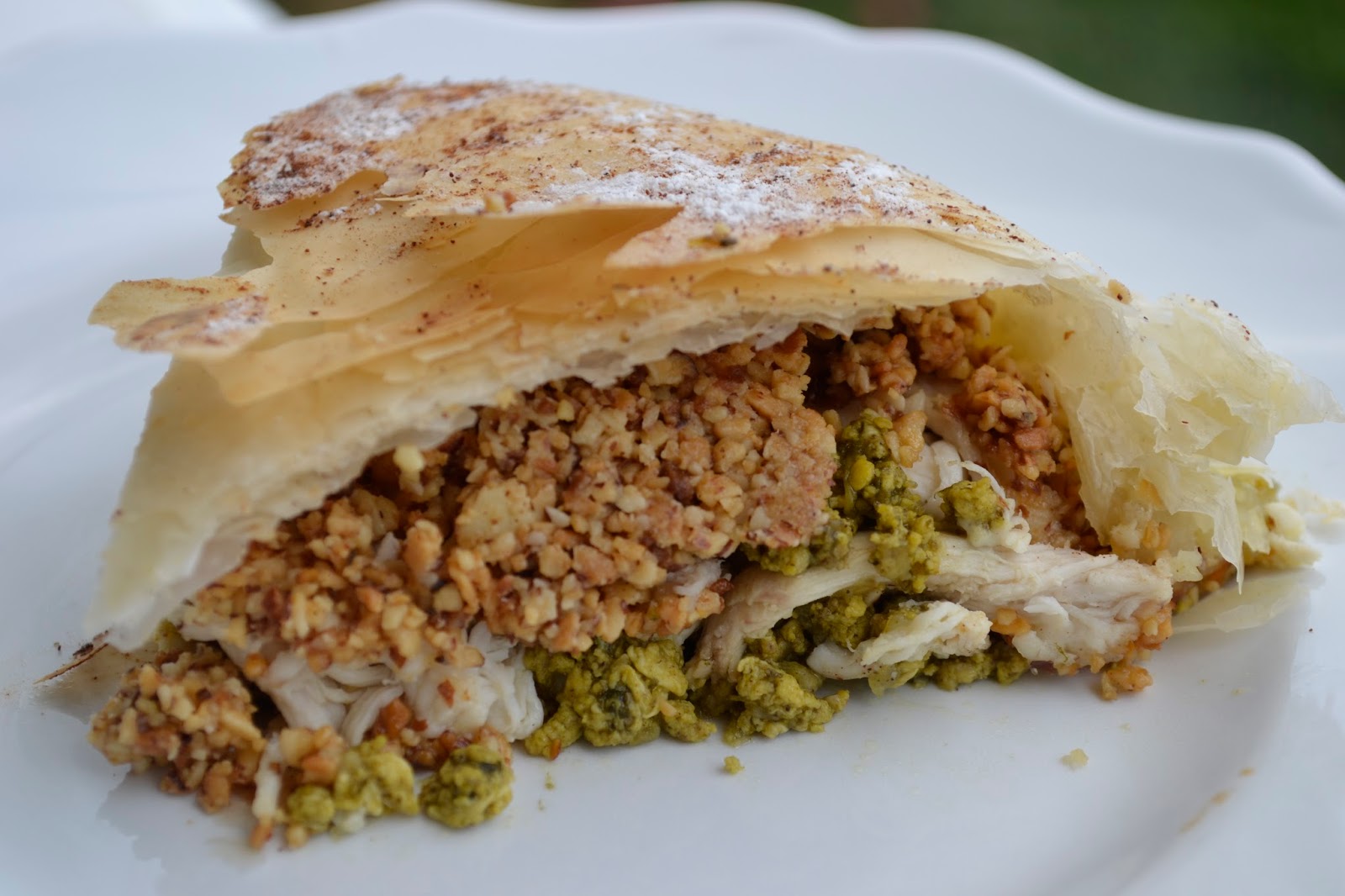 The Arabs introduced Moroccans to meat infused with spices and wrapped in a pastry, Chicken Bastilla, which is a traditional Moroccan chicken pie [Photo by Sweet Morris]

Moroccan chicken christened “Chicken Bastilla” is such a delicacy that is prepared into a pie. It is cooked with ginger, pepper, saffron and cinnamon before being coated with Warga pastry mixed with herbs and an omelette.

Almonds are also added to give the chicken a good flavour.

Tagine is a sweet stew cooked over low heat for hours. It contains meat, and vegetables cooked in a traditional way; in a clay pot. The meat becomes tender while the vegetables are allowed to boil and flavour the meat before being served with Moroccan bread as an accompaniment. 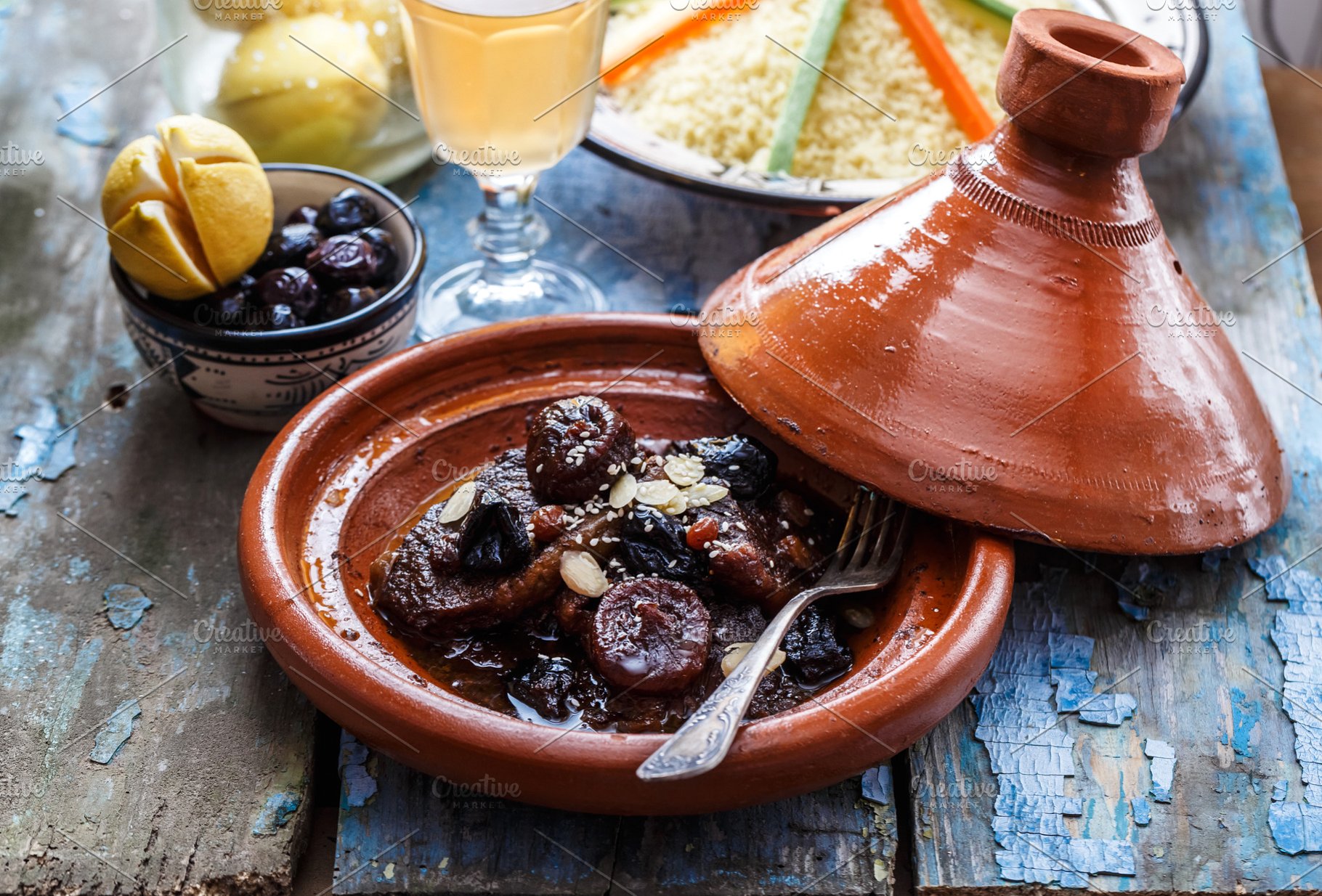 It is a sweet and enjoyable meal which many people get to like with the first serving. Lamb meat is cooked until it is tender and mixed with saffron, ginger and onions. Prunes are later used to coat the meat as well as cinnamon and honey.

This delicacy is popular as a traditional offering at holiday gatherings, weddings, and other special occasions.

Kefta is the local dialect for lamb meat which is cooked with cumin, paprika and herbs then shaped into balls. Its preparation entails grilling or pan-frying and later garnished with a lot of tomatoes/tomato sauce. 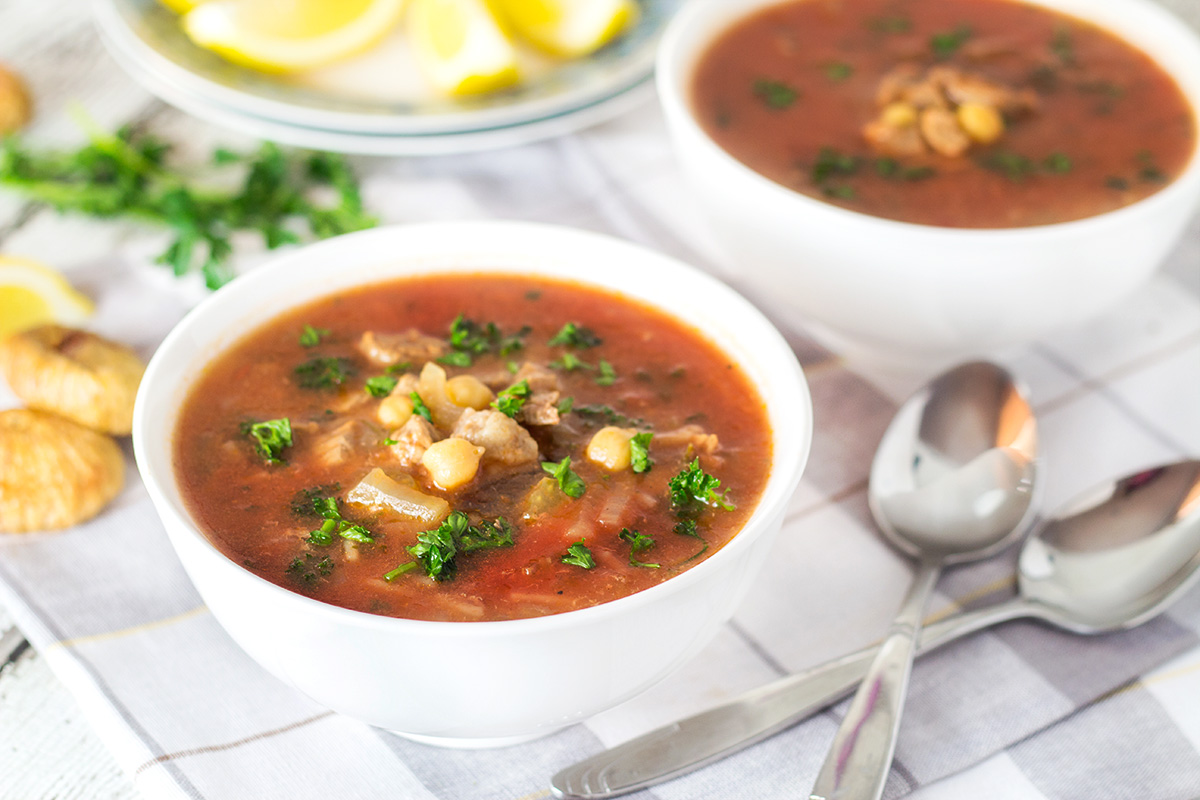 Harira soup comes from Morocco and combines beef, chickpeas and plenty of tomatoes [Photo by Cooking The Globe]

The best soup with a unique mark of the Moroccan culture. Harira refers to a tomato-like soup mixed with lentils, chickpeas, rice or noodles; it is greatly loved for its distinct taste and fullness of the stomach. Harira is a staple food eaten traditionally during the month of Ramadan when the is served with a side of dates and a honey-soaked sweet treat known as ‘chebakya’ following a day of fasting.

Its roots, however, spread across the North African region known as the Maghreb, of which Morocco is a part.

Imagine yourself munching that juicy piece of lamb meat roasted as a whole in a deep hole with a special type of wood known as araar. The smoke from the araar gives the lamb a uniques taste.

Méchoui is a dish served at the beginning of the meal, as part of a feast or diffa. With the fingers of the right hand, the host takes pieces of grilled meat and offers them to guests. Traditionally, no cutlery is used to serve a mechoui, because, due to the slow cooking of the meat, should be able to be detached without any effort.

Eating Malawi’s mbewa (mice) is the ultimate show of courage

Top foods for you in Africa’s best island, Zanzibar