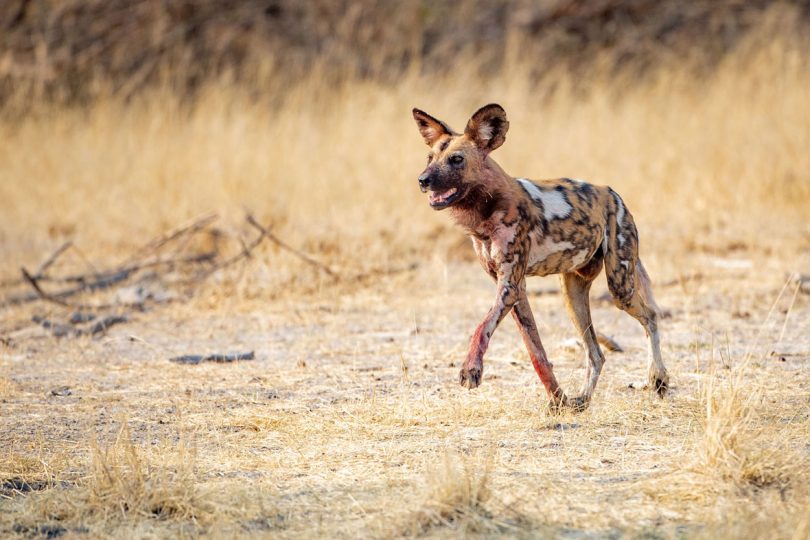 The African wild dog joins the pack of the endangered mammals across jungles in Africa for over 20 years now.

It also goes by the name African painted dog or the wild hunting dog. It’s characterized by a patchy, multicolored coat, big bat-like ears, and a bushy tail. The tail’s tip is white for ease of identification when hunting.

These mammals have a fierce reputation of unity of purpose. They always hunt as a pack and are brutal to their prey.

Summary of the key features of the African wild dog 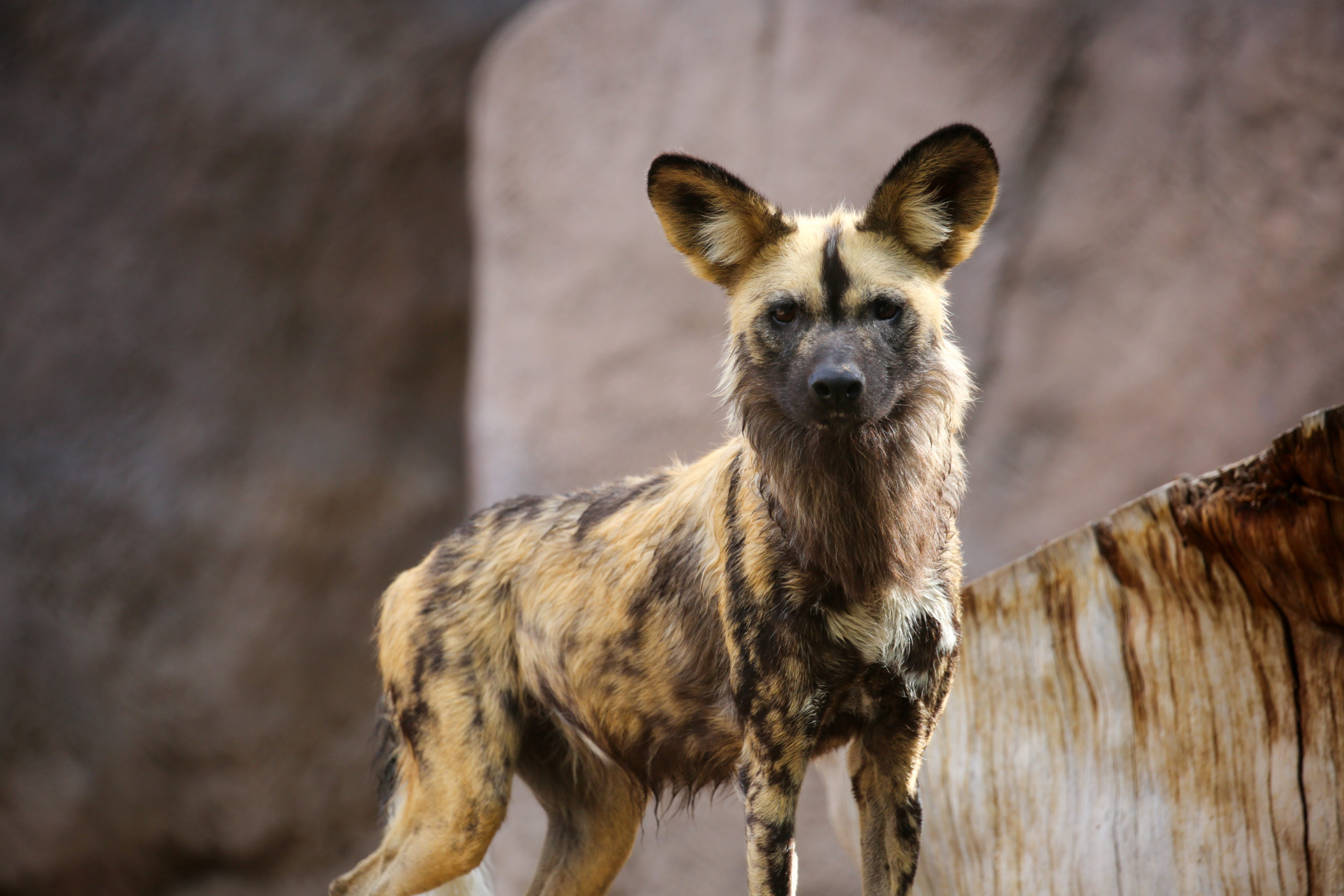 Wild dogs of Africa are the American version of wolves, thus cannot make good pets. Their environment should be natural with daily long distance migrations.

The surroundings must have food to sustain themselves and their young ones. They live in southern Africa and parts of Eastern Africa.  You will also find them in the Sahara Desert.

African wild dogs have four toes – a defining characteristic talking against African wild dog pet. The gregarious wild dogs congregate in groups of about ten, while some packs have more than 40 members.

They are opportunistic predators that target gazelles and other medium-sized ruminants. Theses canines are capable of sprinting at speeds of more than 44 mph.

These speeds makes its movement very easy but hard to track.

What are Wild Dogs in Africa Called?

The Cape hunting dog or painted dog are two of the many names for the African wild dog. Scientifically known as lycaon pictus, the name defines colour and coat pattern. Often, these dogs have a multi-patterned coat with different but erratic colours.

Some have splotches of black, yellow, white or red fur. Like house dogs, they are intelligent and friendly. They enjoy being around one another. Both genders watch out for puppies and ensure that they are fed.

They even look after orphaned puppies that do not belong to them, and they communicate with one another using two standard sorts of calls. When they get lost or when a pack member goes missing, they make the “hoo” call.

It has an owl-like quality about it. Two or three kilometers away, the dogs can hear the call. That’s how they locate one another.

How Many African Wild Dog are Left?

There are 6,600 African wild dogs Africa. Their small number across the globe is as a result of a 20-year endangerment period.

Being wild animals, they fiercely attack domestic animals, people leading to conflict. Yet, human beings are at times blamed for extending their farming activities to the habitat of wild dogs Africa.

Habitat fragmentation increases conflicts between people and wildlife. It leads to localized, small population extinction due to epidemic diseases, which is also a threat to the African wild dog.  Distemper and rabies are viral infections commonly affecting them.

However, larger populations are likely to survive such epidemics and recover. Further, competition with lions and other large predators also account for their decreasing numbers.

As it is now, these canines are losing the areas where they moved freely. Human populations continue to rise with agriculture, settlements, and roads flourishing. 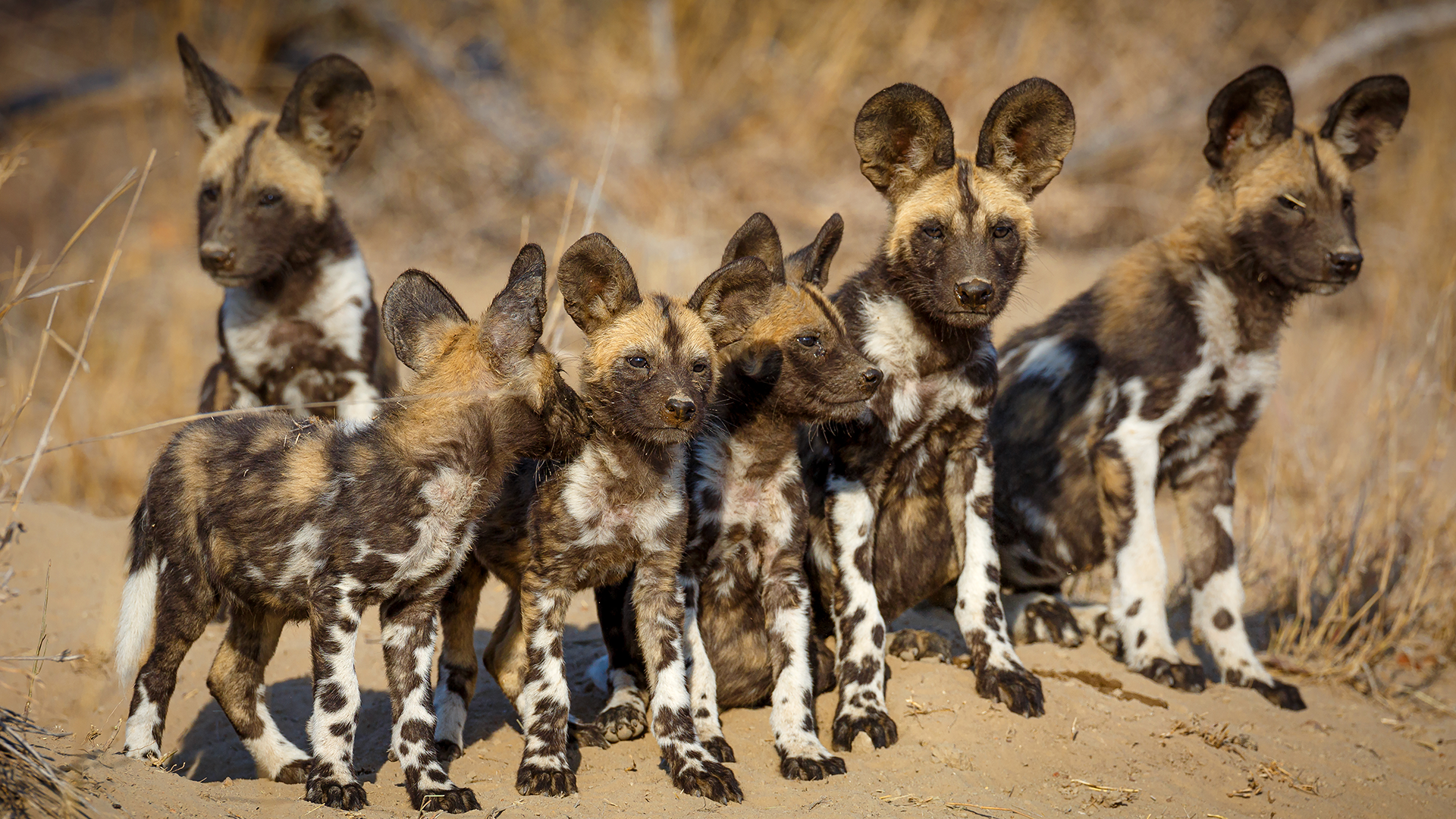 A pack of African Wild Dogs.Photo by The Out door Journal

When forced to engage with people, an African wild dog typically becomes highly violent. Aggression is part of their DNA and that’s what keeps them alive in the wild.

Without this trait, it is a herculean task to hunt down prey. The pack fires up the aggression in each dog making hunting very easy.  They have teeth with a ridge resembling a blade to aid in slicing through prey.

Are Wild Dogs Friendly to Humans?

So, one would wonder: is an African wild dog a danger to a human being? Interesting, these dogs are not a threat to people. They do not view humans as their prey, in contrast to other, more well-known predators.

In fact, they are typically curious rather than violent towards people but it advisable to exercise caution.