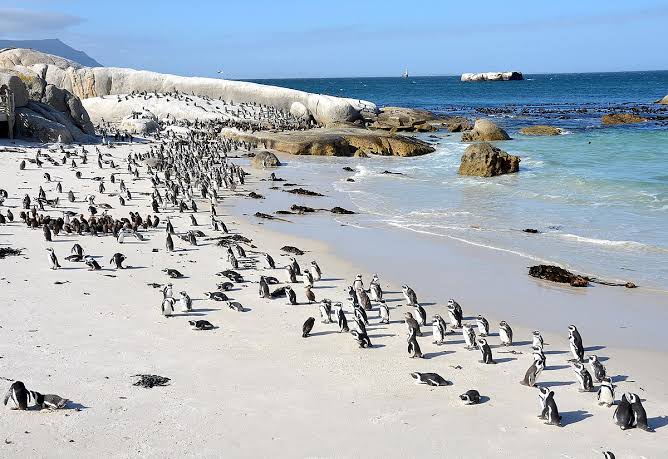 Boulders Beach situated at Cape Town’s Simon’s Town in South Africa is a name all too familiar, for its phenomenal sights of the African penguins.

It is one of the most popular penguin colonies in South Africa among several others in different islands located in the Western and Eastern coastline of South Africa and Namibia.

At Boulders Beach, now considered to be one of the largest penguin colonies in South Africa, a special breed of these creatures – jackass penguins – pull crowds of 60,000 visitors every year.

Jackass penguins referred to as the African penguins are largely concentrated at Boulders Beach. Their history traces back to 1983 when they first landed at the False Bay from Dyer Island. Aided by plenty to feed on, these aquatic birds quickly multiplied but have in the last decade decreased due to marine pollution hence marked as endangered species.

It is estimated that the colony breeds about 3,000 African penguins annually at the Boulders Beach which sits beneath the Table Mountain National Park. Although the main attraction at the beach is the penguins, human leisure activities are gaining traction. The ancient boulders at the beach shield it from strong ocean winds and waves making it an ideal location for kids swimming at the rockpools besides watching penguins.

The beach’s warm waters are pristine and soft white sand covers the Boulder Beach’s shores and day camping is very popular at the beach. January is the best time to visit Boulder Beach to see the penguins as they lay on the beach basking in the sun. Early mornings and late afternoons give you real action as the birds are hyper during this time of the day.

For a chance to enjoy the views of the penguins at the beach, a small fee of $5 applies for adults while children pay $2.