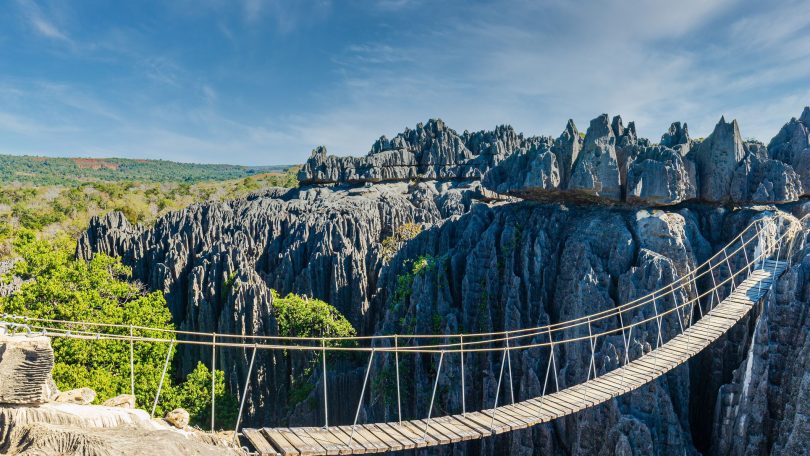 Unique places in Africa are surprisingly shocking and you doubt for a moment if you are on the continent. However,  Africa is the home of surprises.

Great mountains and great creatures roam the waters; great lakes and rivers write the harmony of the landscape all abound.  Africa’s unique ecosystem draws on millions of safari visitors every year. There is so much to see.

If you’re looking for something a little more off the beaten path, we take you to the lesser-known attractions you won’t want to miss!

So, why not travel and explore these places and see their mesmerizing beauty with your own eyes? Journey into unique unexpected destinations with different blends of cultural elements and beautiful landscapes. We will help you plan a unique travel adventure to Africa with confidence.

What are the Most Beautiful Places to Visit in Africa?

What is the Number 1 Travel Spot in Africa?

South Africa is the number one travel spot in Africa. Explore the breathtaking cities of Cape Town, Franschhoek, and Johannesburg, among others. The most beloved travel destination, Cape Town, sits at the southern tip of South Africa.

What do Tourists do in Africa?

African wildlife is the number one tourist attraction in Africa with East and Southern Africa taking the lead in game adventure.

For instance, The Congo and Uganda are famous for their mountain gorillas. Virunga National Park is probably the best place to see these impressive beasts. Below is a rundown of amazing antiquities, unique and stunning towns, and spectacular and sublime natural features in Africa.

If you are planning to travel to the continent, here are 5 beautiful places you would not believe are in Africa.

Stone Town is undoubtedly one of the unique places to visit in Africa, yet you won’t feel you are in Africa. The uniqueness of Stone Town in Zanzibar is striking because of its beautiful architecture. The town has a unique mix of Arab, Persian, Indian, and European components.

Exploring these narrow cobblestone streets in Stone town infused with Arab-style and a distinct Swahili atmosphere is the best way to let your feet follow your curiosity.

Stone Town is a tangle of winding alleyways that have remained true to their character since the 19th century. This ancient city is a gateway to the past, where you can peruse the Forodhani Gardens night market, or meander the Beit el-Ajaib, a former sultan’s palace.

Being a tropical paradise, Stone Towns delights with a profusion of water-based activities. Sail on a traditional dhow, swim with dolphins, and explore unique coral reefs. Few island destinations in Africa offer such intimate access to the ocean paired with perfect conditions.

Damaraland – Namibia. Photo/ And beyond.

With unique barren moon-like landscapes of exceptional natural beauty, Damaraland has a dramatic desert feel. It is a stark contrast to Africa’s perception, with its predominantly lush and green topography.

This mountainous region is home to many large mammals that have adapted to harsh geology, which makes it a unique place in Africa. The mammals include the famed desert-adapted elephant, mountain zebra, and the endangered black rhino.

Namibia’s highest mountain, The picturesque Brandberg is home to thousands of ancient rock paintings. It is known as the greatest outdoor art gallery in the world. 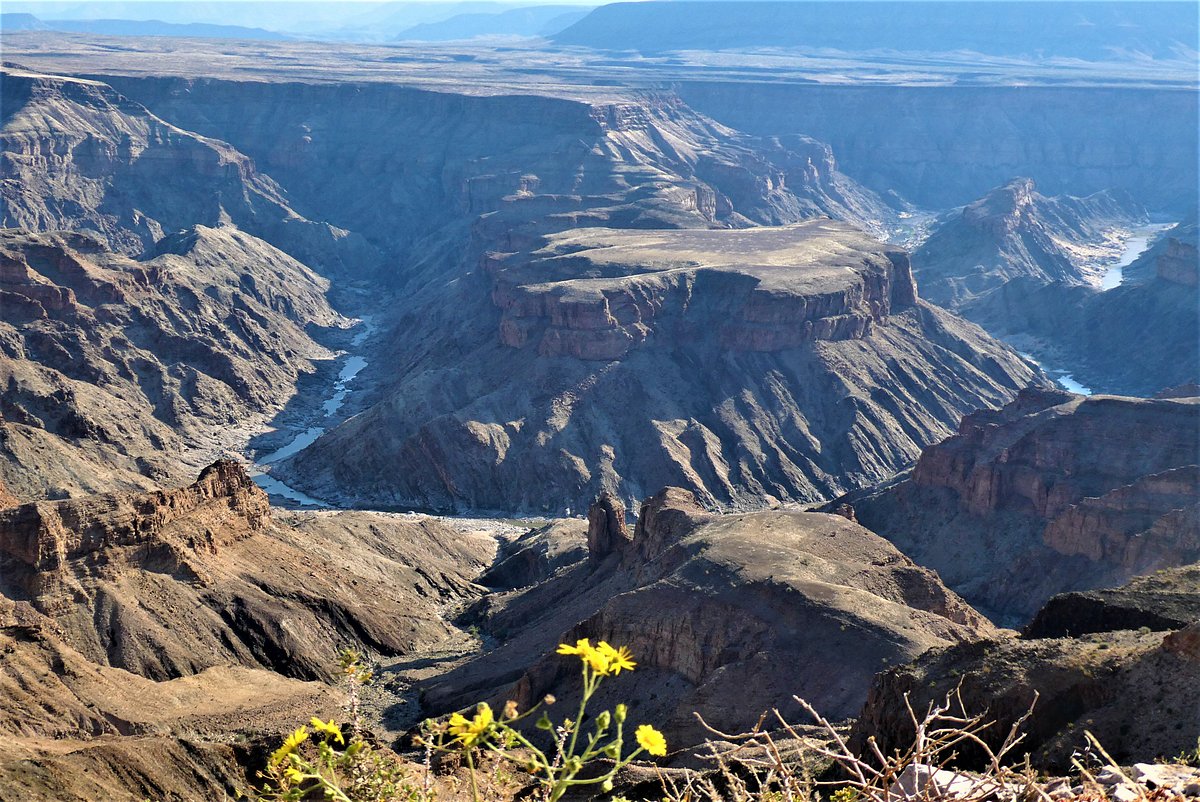 Fish River Canyon is one of the unique places in Africa, found in Southern Namibia. It is the second largest canyon on earth, after the Grand Canyon in the USA. You’ll feel you are in the States because of the similar terrain.

The Canyon forms part of Ais-Ais Richtersveld Transfrontier Park. It is a bucket-list adventure for avid hikers wishing to connect to the natural world. Some hikes at Fish River Canyon feature a carpet of nightly stars and testing endurance.

The canyon’s most vast viewpoint overlooks the gorge from the gate of the Hobas Campsite. Nature lovers from all over the globe flock to the place to witness the dramatic plunging ravines and rock faces, and stand in awe of this natural wonder. 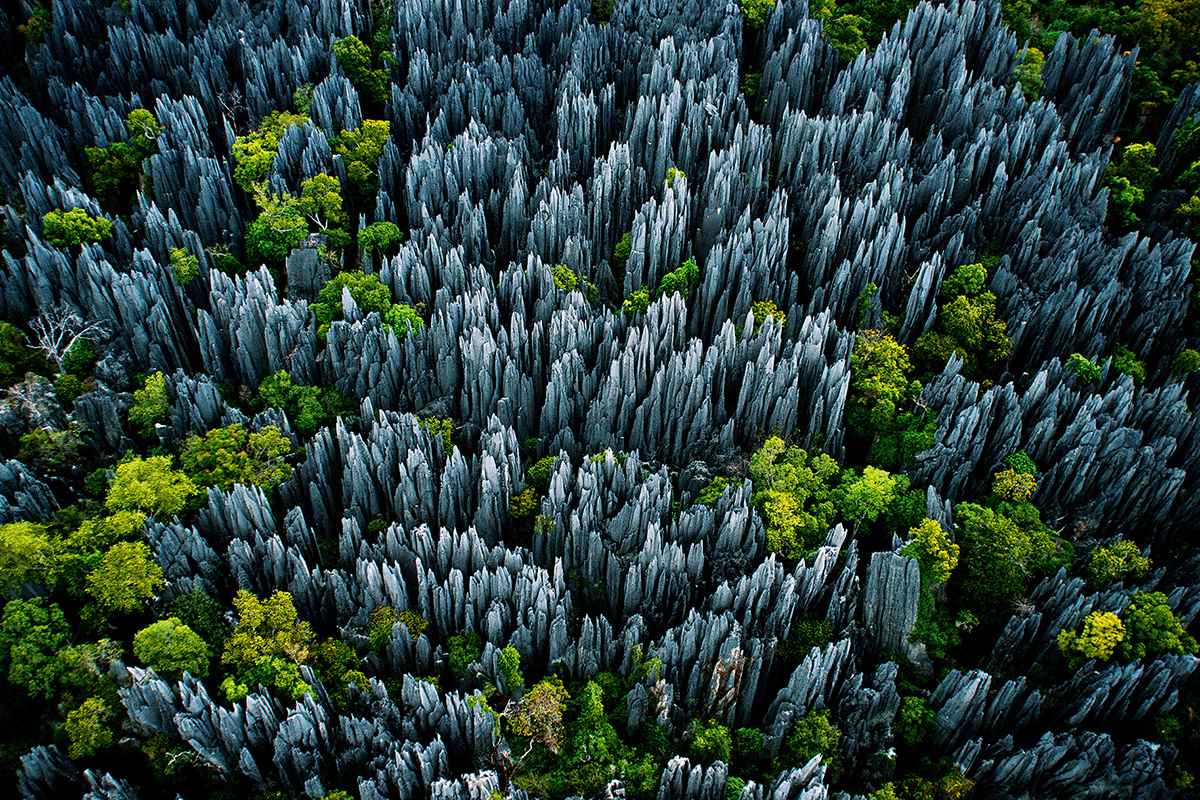 Madagascar has about 90% of the fauna and flora found nowhere else on Earth. Home to Tsingy de Bemaraha National Park, Madagascar is distinctly different from other ‘plains of Africa‘.

The Tsingy de Bemaraha National Park is a worldly destination where few have trodden, far from the tourist crowds. Two of its spectacular limestone plateaus known as Great Tsingy and Little Tsingy dominate the park. Scattered between the plateaus are forests, lakes, and mangroves, creating astounding habitats.

They built a network of aerial suspension bridges, making it possible to explore and climb from one peak to the next with the help of a trained guide.

Mozambique’s gem, the Quirimbas Archipelago, is one of the unique places in Africa and has become a sought-after seaside destination, and it keeps its exclusivity.

The unspoiled beauty of powder-soft sand beaches, swaying palm trees, and inviting turquoise waters will meet you. Quirimbas Archipelago is made up of over 27 offshore islands, strung along the coast of Mozambique. Each island has a story to tell. Some boast ancient architecture, while others are the most romantic honeymoon destinations on Earth.

Staying at luxurious lodges right at the water’s edge lets you disappear from the modern world. And when you aren’t scuba diving or snorkelling on pristine reefs, you’ll be admiring the setting sun kissing the ocean during a traditional dhow cruise.