The government is currently investigating the type of poison used by a herder in Kenya’s tourist hotspot of Laikipia, East of the capital Nairobi to kill 18 endangered vulture species.

“Kenya Wildlife Service is investigating circumstances under which 18 vultures died in Laikipia County. Samples from the vultures have been taken to the Government Chemist for analysis and vulture carcasses disposed off to prevent possible spread of disease,” KWS stated.

A while later, KWS told the public that: “Preliminary investigations have found that the vultures could have died after eating a camel carcass that had been poisoned after being preyed upon by a lion.”

On April 23, Investigations by KWS in tandem with other government investigative agencies established that the owner of two lions which were killed and preyed on by a lion may have poisoned the carcasses intending to kill the vultures.

He has since been arrested as investigations continue. 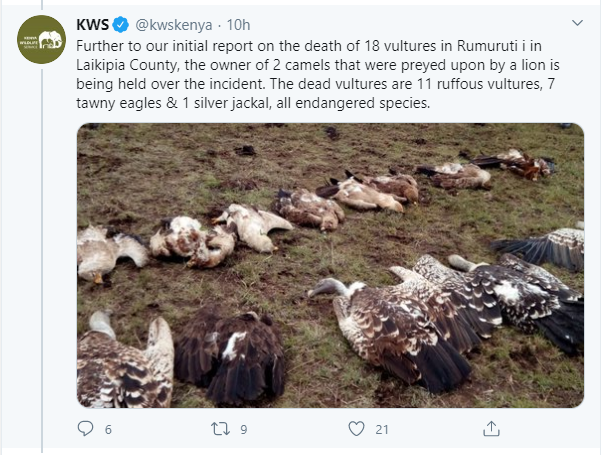 “Two camels that had been missing from a boma for 4 days were killed by a lion whose foot marks were identified in the vicinity. Its suspected that the vultures died from eating the poisoned camel carcass.”

KWS is now working with the local administration and the Directorate of Criminal Investigation (DCI) into establishing the kind of poison used.

“Samples from the vultures are with the Government Chemist for analysis while the carcasses have been disposed off to prevent potential spread of disease,” added the statement.

The law expressly prohibits any act of killing or harming an endangered species or any game for that purpose spelling out harsh punitive terms of life imprisonment or a fine of up to Sh20 million or both.

For the past three decades, the number of six endangered vulture species has decreased by over 62 percent in the African continent, giving wildlife conservationists a hard time in keeping these numbers down.

In a feature recently by the National Geographic, it has bee established that the dwindling numbers are a result of human-wildlife conflict.

“Herders who lose livestock to lions, hyenas, and other carnivores will sometimes sprinkle toxic pesticides over the felled animals’ carcasses in retaliation. The poison kills the predator, but it also kills the vultures who swoop in to eat the poisoned animals,” it reported.

5 popular meals for dinner in Nigeria

Nov 20, 2020
Loading ... Load More Posts No More Posts
Subscribe to our Weekly Newsletter
Join Our Newsletter
Give it a try, you can unsubscribe anytime.