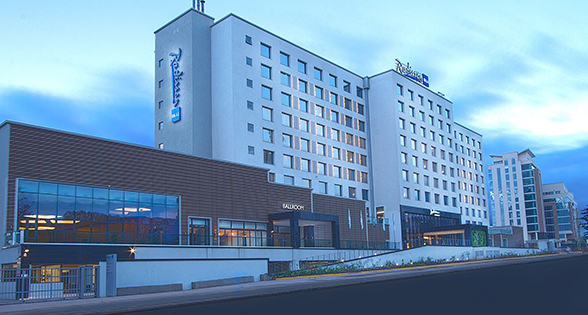 Harsh business times occasioned by the COVID-19 pandemic have pushed the Radisson Blue Hotel in Nairobi’s Upper Hill out of the market.

The Radisson Blu – an international hotel chain – announced that Radisson Blu Hotel in Upper Hill will remain closed until March 2021.

The hotel sent a huge number of its staff home citing low bookings towards the festive season, a far cry from the norm in other festive seasons when the hotel’s bookings are at an all-time high.

A spokesman from Radisson Blu said that the decision was taken to mitigate the adverse effects that the COVID-19 pandemic has had on the business.

“To mitigate some of the economic impact of the pandemic, coupled with the uncertainty of Radisson Blu Hotel Nairobi Upper Hill’s reopening date, we have had to make the difficult decision to reduce the size of our workforce at the hotel,” said the spokesperson.

“We understand this is an extremely difficult time for those affected and we will provide support to them throughout the process.”

Although the pandemic has eaten into the hotel’s profits since March when the first COVID-19 case was reported in the country, Radisson Blu Upper Hill has been paying her staff.

It was hoping for better times with the festive season but the business has been low. It projects that things will have changed by March 2021 when it is likely to re-open.

Those sent home got their severance pay and promised to be considered next year when it resumes business.

Radisson Blu’s Upper Hill facility is the biggest in its brands in Kenya with a 271-bed capacity.

It has been capitalizing on hosting conferences and parties. It has always appealed the corporates who wish to hold events out of the central business district of Nairobi.

However, the COVID-19 pandemic shifted meetings to the digital space as most people worked remotely and this put the final nail in the coffin for the establishment’s finances.

In Westlands, Park Inn by Radisson is still operational as well as Radisson Blu Hotel & Residence Nairobi Arboretum which are owned by Radisson Blu. Combined, these two sister hotels have a 262-bed capacity.

The decision to temporarily shut down Radisson Blu Upper Hill hotel follows in the steps of other giants in the hotel industry who have taken this route in the past.

In May 2020, the iconic Fairmont Hotels and Resorts shut down Fairmont The Norfolk and Fairmont Mara Safari Club and fired all employees.

COVID-19 Pandemic Drives Serena, Fairmont Out Of Business In Kenya

Mehdi Morad, Country General Manager said that the decision to close the two establishments was informed by the uncertainty in knowing when COVID-19 pandemic will end.

“Due to the uncertainty of when and how the impact of the global pandemic will result in the business picking up in the near future, we are left with no option but to close down the business indefinitely,” Morad said in a memo.

He added: “It is therefore the decision of the management to terminate the services of all its employees due to ‘frustration’ by way of mutual separation and taking into account the loyalty and dedication the employees have put into the success of our company in the previous years.”

A recent survey released by the Central Bank of Kenya indicated that bookings in many hotels across the country were still low at 23 per cent in November whereas it was at 24 per cent in September.

This has been occasioned by the second wave of coronavirus that Kenya is battling. It has repelled many potential visitors from travelling across the country and also flying into the country.

A few weeks back, hoteliers at the coast decried low books which is not a norm during the festive season.

The hoteliers blamed the low bookings on the limbo among travellers who are apprehensive that a lockdown could be imposed when they are away from home.