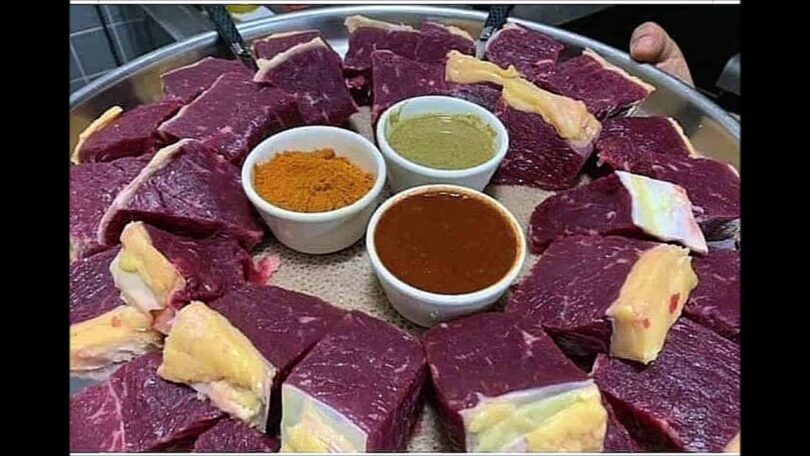 Why do Ethiopians eat raw meat when this is a delicacy people best enjoy when cooked? In fact, beef, commonly eaten raw in Ethiopia has so many ways to prepare it.

It must be a case of acquiring a taste for a non-Ethiopian to eat uncooked beef. From the look of it, you would barely notice it because of the accompaniments served alongside this unique delicacy from Addis Ababa.

Worth to note is that this art of eating is a longstanding history dating back centuries ago. And as true sons of the soil, Ethiopians continue practising it to preserve their tradition.

In Ethiopia, it is not uncommon for raw meat to be served as part of a dish called kitfo. Kitfo is similar to steak tartare and is made by finely mincing raw beef and serving it with spices, herbs, and other accompaniments. 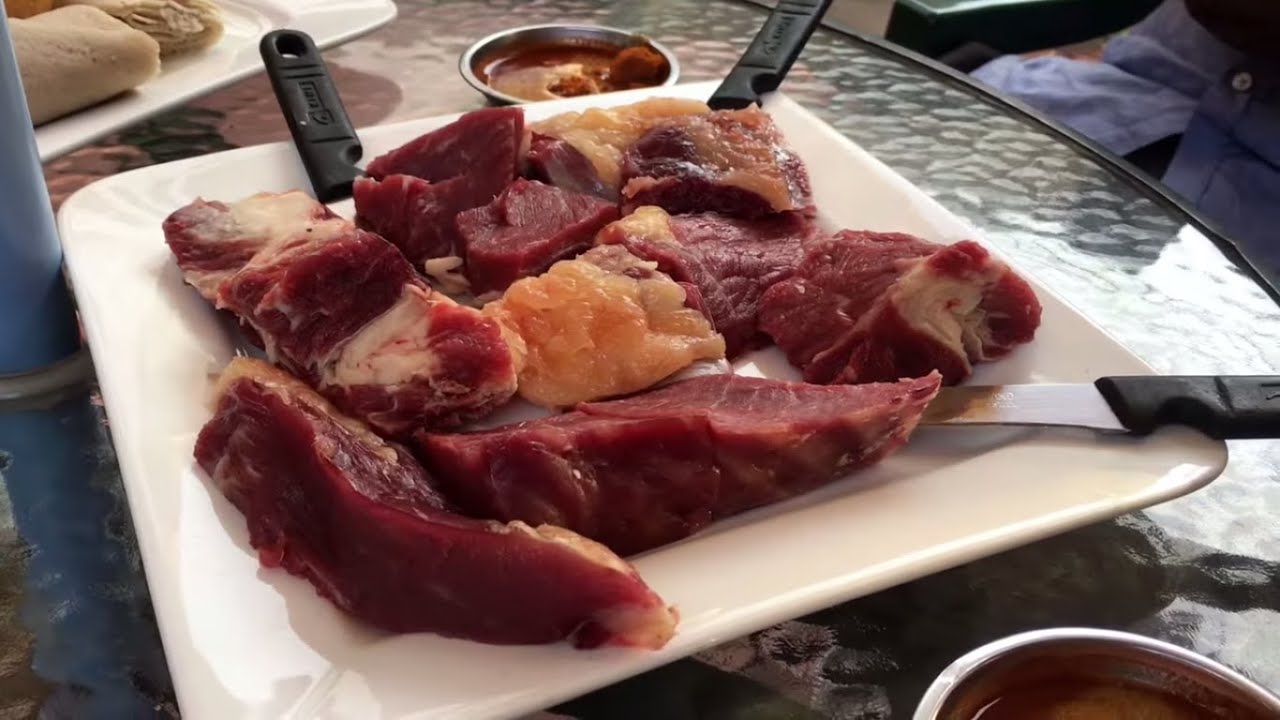 The meat is usually accompanied by injera, a type of spongy flatbread that is a staple in Ethiopian cuisine. A hot sauce is also served to complete the meal. As far as why do Ethiopians eat raw meat is concerned, it has so much to do with the texture and taste.

Raw meat has a distinctive flavour and texture

Historians trace the beginning of Ethiopians eating raw meat back to the 16th century. The Abyssinian-Adal War, which lasted for a century and was fought intermittently between the Ethiopian Empire and the Somali Adal Sultanate in the sixteenth century, answers why do Ethiopians eat raw meat.

During these early Somali victories over their adversaries, Ethiopian soldiers began consuming raw flesh as a tactical strategy. While evading the Somali Adal army, the soldiers started eating raw meat at night for fear that the smoke and fire would give away their location as Somali troops moved into the Blue Nile and Lake Tana.

During the Conquest of Abyssinia, this military strategy of avoiding detection evolved into a delicacy, and from that point forward, Ethiopia’s love of raw meat took hold!

Several cultures eat raw meat as a part of their traditional cuisine. Here are a few examples:

Sashimi is a Japanese dish made with thinly sliced raw fish or meat. It is typically served with soy sauce, wasabi, and ginger.

Tataki is a Japanese dish made with thinly sliced raw or seared beef, fish, or pork. It is typically served with a sauce made from soy sauce, citrus juice, and green onions.

Carpaccio is an Italian dish made with thin slices of raw beef or fish. It is typically served with a lemon or vinegar dressing and garnished with herbs and grated Parmesan cheese.

Steak tartare is a French dish made with finely chopped raw beef or horse meat. It is typically served with onions, capers, and a raw egg yolk.

Kuai is a Korean dish made with raw beef, pork, or octopus. It is typically served with a spicy sauce made from gochujang (red pepper paste) and garlic. 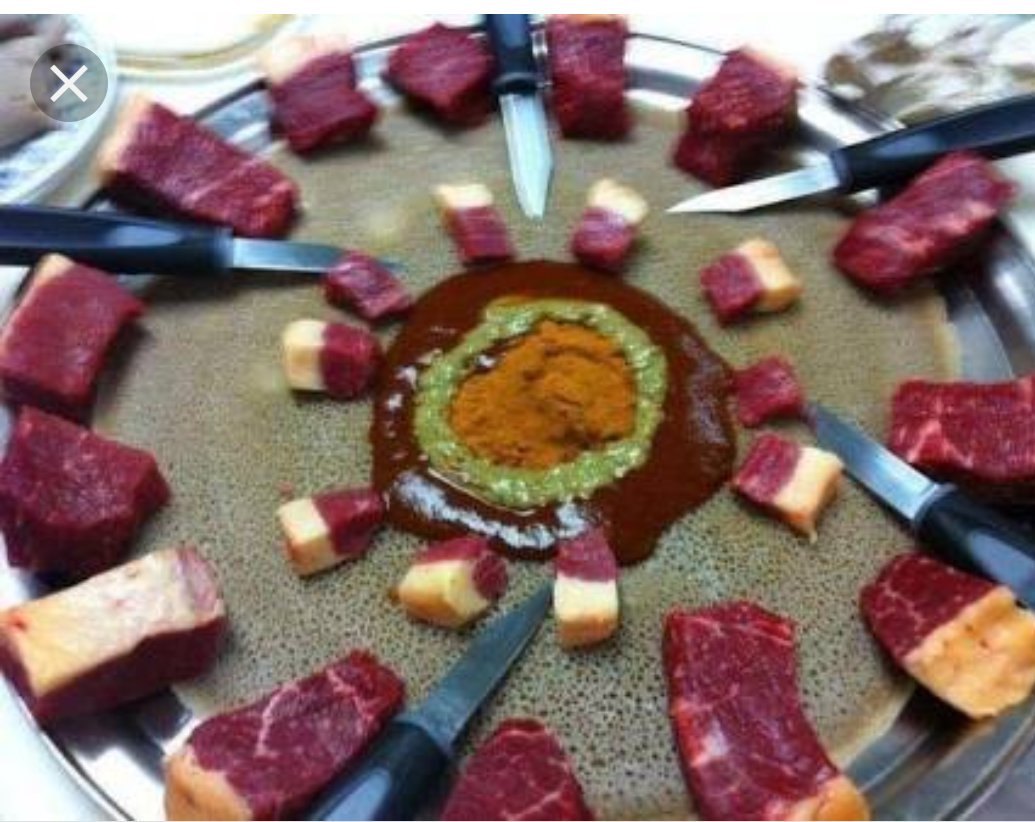 It’s interesting to note that Ethiopians started eating raw beef 3000 years ago. According to history, this was to avoid being colonised by the Italians who invaded their country in the 16th century.

They never cooked meat because they thought the smoke and fire would give them away to the enemy. But this tradition continued long after the battle was over. That’s the reason behind ‘why do Ethiopians eat raw meat’.

What Is The Most Eaten Food In Ethiopia?

Injera is Ethiopia’s staple food. It is a type of flatbread made from teff flour. Injera serves as an accompaniment for a variety of dishes, including stews made with vegetables or meat.

They include wat, a spicy meat stew made with berbere spice. This bread is a central part of the Ethiopian diet and is often eaten at every meal. Other popular dishes in Ethiopia include: