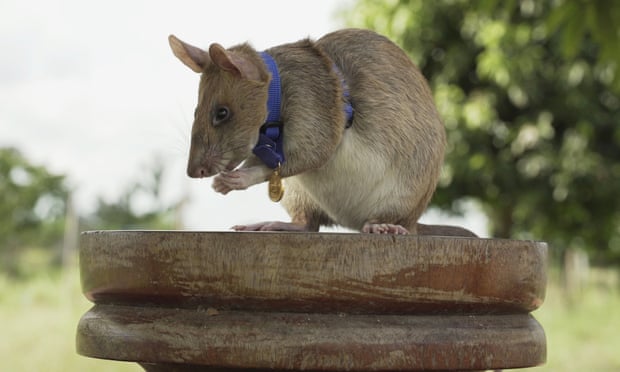 A Tanzanian African pouched rat nicknamed Magawa has retired. The rat has been on active duty in Cambodia sniffing out explosives for the last decades.

Magawa was a highly trained rodent courtesy of APOPO, a Belgian nonprofit. It has been instrumental in sniffing out landmines and other explosive ordnance.

Magawa, the rat sniffing landmines in Cambodia. [Photo: The Guardian]

The rat in while on active duty would detect explosives and alert its handlers for detonation or safe removal depending on the circumstances.

In its tenure in Cambodia, Magawa cleared more than 141,000 square metres of land. This is equivalent to about 20 football pitches. It sniffed out 71 land mines and 38 items of unexploded ordnance, according to APOPO.

In 2020, Magawa won a civilian award due to his bravery courtesy of Britain’s charity. This was a unique case as the honour is reserved for dogs in service.

His retirement came at a time that Apopo had observed that he began to slow down due to old age.

In terms of health, Magawa remains as fit as a fiddle.

“Although still in good health, he has reached a retirement age and is clearly starting to slow down,” APOPO told the Guardian. “It is time.”

The Tanzanian giant pouched rat according to Apopo had a unique capacity to get special training in detecting explosives.

Most pouched rodents are trained in detecting scents. They have been seen to work graciously in such tasks for food. However, Magawa’s size made it easy to have him in the minefields.

His size and movement pattern cannot trigger an explosion. They have a lifespan of eight years.

Magawa is part of a breed of rats specially bred for working in the minefields.

Cambodia’s northwestern city of Siem reap has been home to Magawa. The city has a line of temples – Ankor temples – where he was trained on bomb-sniffing.

The training also involved detecting landmines across the field. His weight, steps made it easy that than of a human being who is likely to trigger an explosion.

Besides working in Cambodia, the rat has also worked in Zimbabwe, Mozambique and Angola where it helped clear landmines. Most of them were left in vast open fields with vegetation during the colonial era.

In Africa, colonialists who engaged with the inhabitants of the land used landmines as part of their artillery. At the time, Africans had no luxury in the use of sophisticated weapons like their colonizers.

While the whites used guns, bombs and landmines to wade off attacks from African fighters, the blacks would only have crude weapons for defence.

History has it that in due course, Africans started making homemade guns which upped their capacity to attack their colonizers.

However, their guns were considered inferior to what was being used by colonial masters of the times.

It is the landmines used as part of the heavy artillery by colonizers that has killed millions of lives years after the pre-colonial war.

When most African countries managed to fight for independence and attained it, the colonizers returned to their colonies in Europe. The landmines that had not exploded remained etched on the ground.

They have been ticking time bombs. Worldwide, they have claimed 60 million people in the past decades. Across 59 countries, there are millions of landmine casualties reported.

In Cambodia’s case, war has been at the heart of the Southeast Asian country. Cambodia has been at war for years with its neighbours Vietnam.

A former French colony, Cambodia went into civil war between 1967 and 1975. The war was between forces of the Communist party of Kampuchea and those of the Kingdom of Cambodia who backed the government.

This civil war left massive landmines in different parts of the country which Magawa was instrumental in sniffing out.