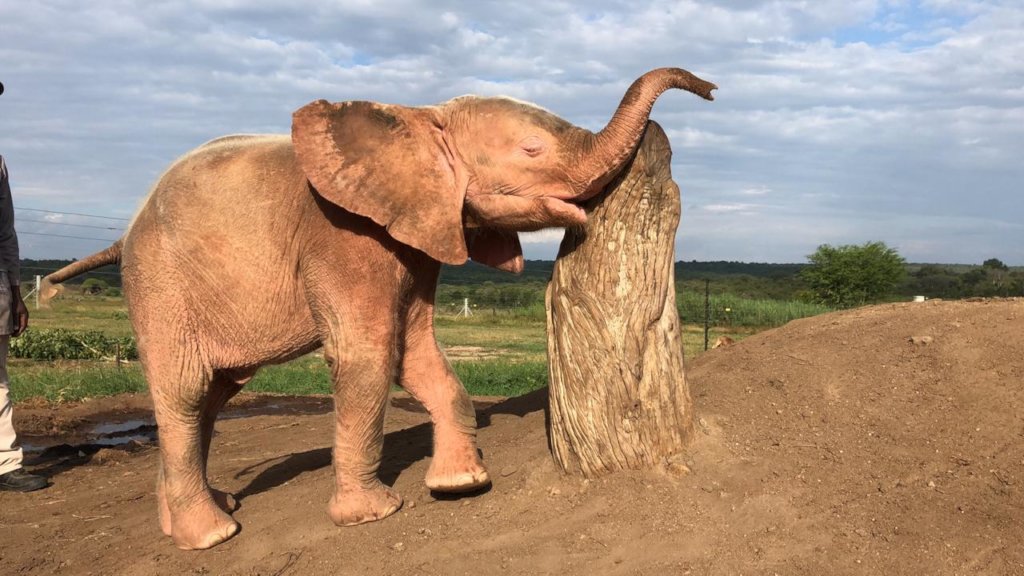 Khanyisa, an albino elephant in South Africa has a tall tale of resilience that started at birth.

The elephant was born an albino in September 2019. Four months later, Khanyisa while enjoying forage at the Kruger National Park fell prey to poachers.

She was caught by a deadly snare set up by poachers leaving her in deep pain. The snare left a deep cut on her mouth as she struggled to ensnare herself.

The harder she tried, the difficult it became for her. The cut penetrated further into her body. She had to endure this pain for days before she was rescued and taken to a sanctuary in Mpumalanga region, in the northeastern part of Johannesburg.

Khasinya was later transferred to Hoedspruit Elephant Rehabilitation and Development (HERD). This has been her home where she now lives with a herd of elephants led by the patriarchal bull, Jabulani.

Also read: Where To Visit, Eat And Drink In Botswana

Adine Roode, HERD founder, told Reuters that the biggest challenge they have faced is poaching. Snares set up have killed a dozen animals.

Roode maintained that a growing human population is one of the reasons attributed to the increasing cases of wildlife snaring. Snared animals are sold for bushmeat in most cases.

“I think that is part of the reason that they accept the orphans because they know how it feels,” she noted.

Khanyisa has come a long way to recovery thanks to a fellow sheep named Lammie that bonded quickly with the young elephant. For the nights, Lammie and Khanyisa share the same pen.

“Lammie played a huge role in Khanyisa’s wellbeing, especially in the beginning. She helped Khanyisa to stay calm,” said Roode.

She was named ‘Khanyisa’ which is Tsonga for ‘Sunshine’. Due to her condition, she gets sheltered when the sun is too hot in order to protect her skin from harmful rays.

Botswana officials from relevant ministries made public the contents of a probe into the deaths of the elephants saying that they found cyanobacteria that produce toxins in water which was responsible for the killing of the jumbos.

Botswana’s deputy director of the Department of Wildlife and National Parks Cyril Taolo in a press briefing said in May, 330 elephants had died.

“What we just know at this point is that it’s a toxin caused by cyanobacteria,” he said according to Reuters.

However, with this discovery, the specific type of neurotoxin is yet to be established.

Taolo said that there have been no deaths reported lately saying that the government will remain on high alert in monitoring the situation for Botswana wildlife during the oncoming rainy season.

There are now questions as to why only elephants were affected by the toxins in the water yet other animals in the Okavango Delta took the same water.

According to the Intergovernmental Panel on Climate Change, temperatures in Southern Africa are rising fast at twice the global average which encourages the thriving of cyanobacteria.

“It amounts to having the right conditions, in the right time, in the right place and these species will proliferate,” Patricia Glibert, a professor at the University of Maryland Center for Environmental Science, who has studied cyanobacteria, told Reuters.

“These conditions are coming together more often, in more places, so we are seeing more of these toxic blooms around the world.”

The mystery of the elephants’ death is not only in Botswana as neighbouring Zimbabwe had also reported 25 deaths for its elephants.

Park officials where the elephants were found dead hypothesized that they could have taken water with the toxins since they were found near a river where they had been quenching their thirst.

“We considered the possibility of cyanobacteria but we have no evidence that this is the case here (in Zimbabwe),” said Chris Foggin, a veterinarian at the Victoria Falls Wildlife Trust, which tested samples from dead elephants from Zimbabwe and Botswana.