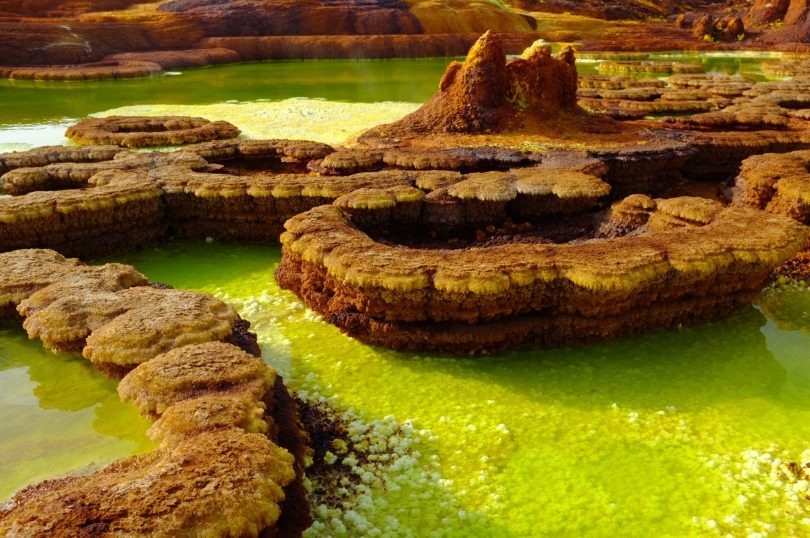 At 100 meters below sea level, Ethiopia’s Danakil Depression is one of the world’s hottest and lowest spots. It is a hub for research on the climate and the survival of extremophile microbes.

The depressions came about after the evaporation of an inland water body and is located near the northern end of the Great Rift Valley. It is isolated from the Red Sea by active volcanoes.

The Danakil Depression is part of the African Rift, which stretches from Lake Tanganyika and Malawi up to the Red Sea and into the Dead Sea of Jordan and Israel.

All the water that enters Danakil evaporates, and there are no streams flowing out of this severe environment. More than ten million tons of salt have been spread over it – that’s what compounds the Danakil Desert in Ethiopia. 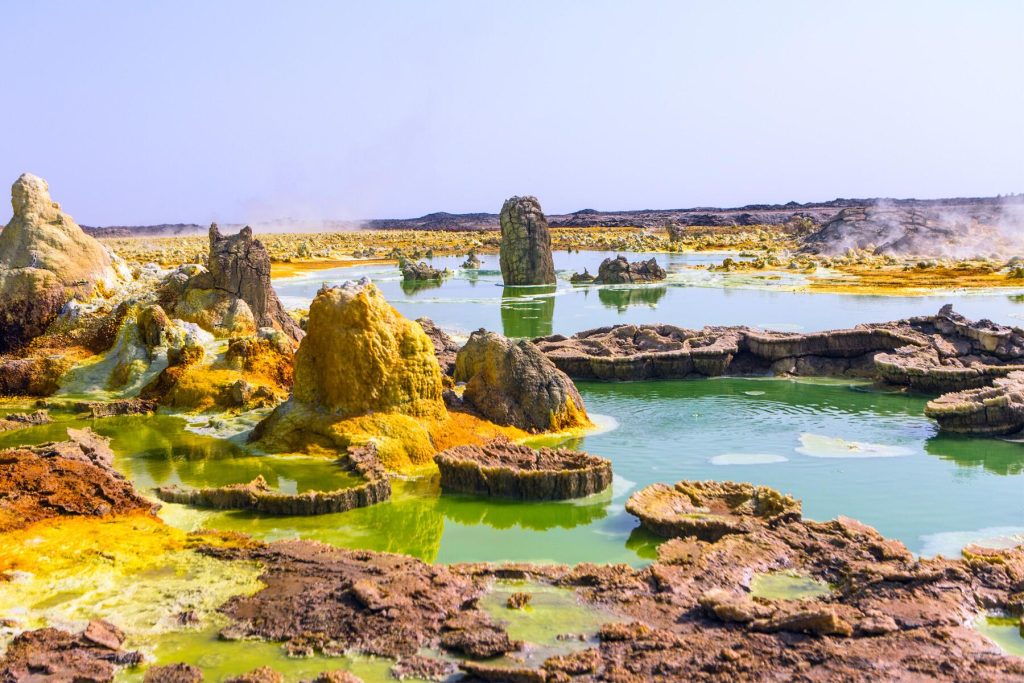 Does Anyone Live in the Danakil Depression?

The Danakil Depression is an area plagued by separatist violence. Despite this, people continue to live here despite its extreme conditions, somehow managing to survive. The Afar people live here.

In order to make a livelihood, the Afar people who reside here rely on the few flora that thrives. They also hugely rely on camel farming which provides transportation services for the few visitors who visit the Danakil Depression.

Camels are essential to the survival of the region. The fact that they can survive in this environment makes them one of the few mammals on the planet.

It should come as no surprise that you will observe them walking around on the depression’s floor as well.

Besides the depression, there is also Erta Ale volcano – there is an Afar settlement. The Erta Ale volcano is one of the most impressive natural features in the area. With just six open lava lakes in the world, it is also the oldest, having first shown itself in 1906.

It is also one of the most beautiful. The hike to Erta Ale is nine miles long and must be completed at night in order to avoid the heat of the daytime sun.

Why is Danakil Depression so Hot?

The youngest volcano on the planet, Dallol, is only a few thousand years old. It originally erupted on the scene in 1926. The entire location lies more than 100 meters below sea level, making it one of the world’s lowest points on the surface of the earth.

This geographical marvel makes Danakil the hottest place on earth.

To the amazement of many, despite its toxic climate and lack of rainfall, it is home to a variety of life forms, including microorganisms.

Extremophiles are creatures that thrive in hostile conditions, such as the Danakil Depression. Toxic volcanic gases in the air elevated soil metal concentrations, and high saline and acid content in the ground and air can’t harm these extremophiles.

Prokaryotic bacteria are the most common form of extremophile found in the Danakil Depression. They are among the planet’s oldest living organisms. 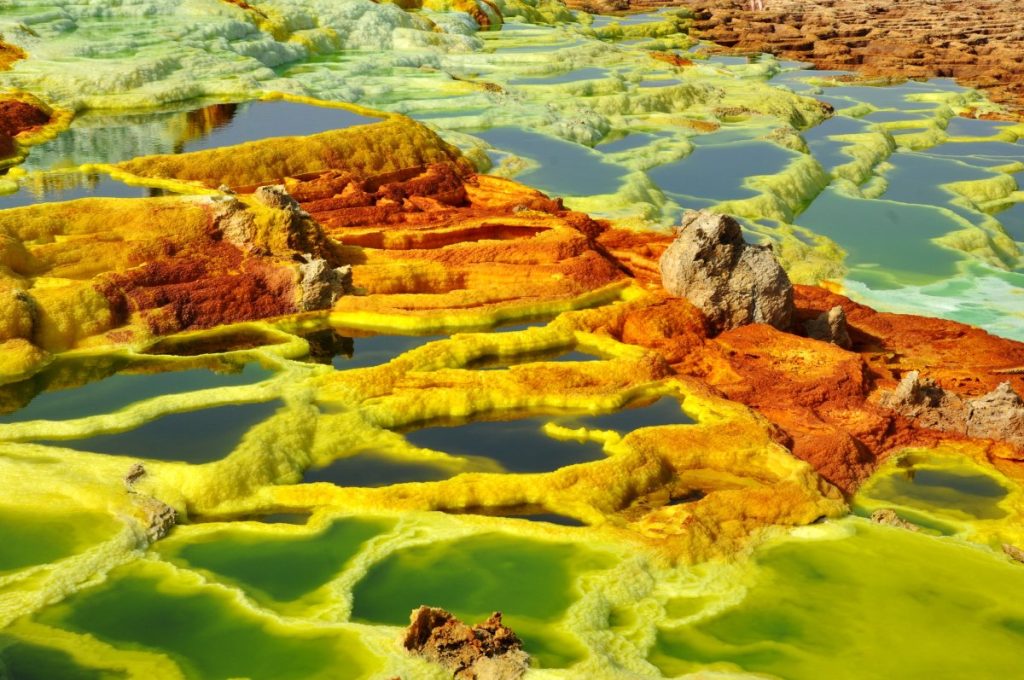 How Deep is the Danakil Depression?

Danakil Depression is around 410 feet below sea level (50 Celsius).  It is one of the hottest and most inhospitable places on Earth – an average temperature of 94 degrees Fahrenheit (34.5 Celsius).

Why it is Important?

Salt mining is one of the few enterprises that exist in the Danakil Depression. An ancient sea once covered the entire region, leaving behind an immense salt plain. Men toil in the hot heat all day long, chipping away at the salt.

Danakil Depression salt mining is carried out entirely by hand. The process is entirely manual. Metal tools and wooden sticks are used exclusively in the mining process.

Pack animals carry the salt, which has been chopped into squares about the size of a floor tile. It takes two days to get to the salt processing plant, where the price of a square foot of salt is about $0.50.

Though hot, Danakil Depression adds to the scenic and historical beauty of Ethiopia.