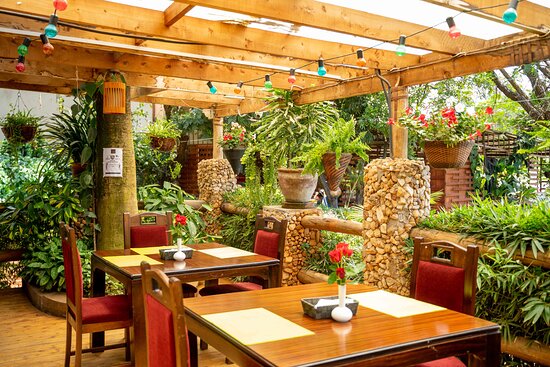 When Hawas Matta and his wife Afum Matta, a Nigerian couple arrived in Kenya in January 2011, all they wanted was to give West Africans in Kenya a real treat through Mama Ashanti Restaurant.

It was an idea that was birthed after a sumptuous lunch at Mama Ashanti Uganda. They had been invited by one of their Nigerian friend who was living and working in Uganda. Uganda’s Mama Ashanti gave them a dream to feed their people living in Kenya.

Hawas, a financial analyst who had previously worked with defunct telco, Kencell visited several restaurants in Nairobi offering West African dishes and none of them met his expectations.

A major repulsion for him was inconsistencies by these restaurants. This was the opportunity he had been looking for and it was finally here. All he needed to do was have a plan in place on how to get things started.

Hawas talked to two of his family friends and they bought his idea to have a Kenyan chapter of Mama Ashanti. With the support, they pooled resources and started the journey to building the largest West African-themed restaurant in Kenya.

Mama Ashanti in Lavington offers full West African dishes all the time. it has a mix of the best dishes from Nigeria, Ghana, The Gambia, Niger, Guinea among others. Hawa told Daring Abroad that one of the decisions they made together with his partners in ensuring that this restaurant holistically focuses on West African cuisine to feed the entire community united by their food culture.

“I went and saw Nana, the partner spoke with him about the opportunity to open up here and he said Hawas, I think Kenya is a large market and I’d love to partner with you so we realized rather quickly it was not going to be a Nigerian restaurant it was not going to be a Ghanaian restaurant it needed to appeal to as many people as possible and we felt that West Africa was the group that we should focus on,” Hawas offers.

The couple got down to business and set up Mama Ashanti Restaurant in Kenya. Afum, a lawyer by profession who has practised in Nigeria for 16 years oversaw all the legal aspects involved in setting up a business.

Hawas who doubles up as the board’s chair took care of the financial side of the business. Within no time, it was up and running.

Today, when you walk into the restaurant’s premises, a sweet aroma wafting in the air from the open kitchen welcomes you. Mama Ashanti’s décor is authentically African with stylish West African touches.

From the famous Jollof rice, plantains and Fufu that West Africa is known for; Mama Ashanti has it all in its original form.

Afum, a director at Mama Ashanti explains that they ship foods such as yams, fufu and spices from Nigeria. She says yams in Kenya are not the same as Nigerian yams. The chefs are superb with their culinary specialization in preparing West African dishes being a testament.

Afum says this has helped in making the restaurant authentic which is what her customers come looking out for.

Also read: A Taste Of Africa’s Most Delicious Meals

“What makes Mama Ashanti cuisine stand out in Kenya is the authenticity. We have put measure in place to ensure that the food you’re getting in Mama Ashanti is home food, it is like the food you get in Nigeria, in Ghana or any other place in East Africa,” Afum remarks.

Traditionally prepared goat stew is a signature dish served with plantains or Fufu. The aroma from the goat stew is appetizing! Nigerian spices work magic on this stew.

Besides, Mama Ashanti serves a diverse clientele ranging from West African in Kenya, Kenyans and expats who try out the different cuisines. The restaurant has a live band that entertains guests as they wine and dine.