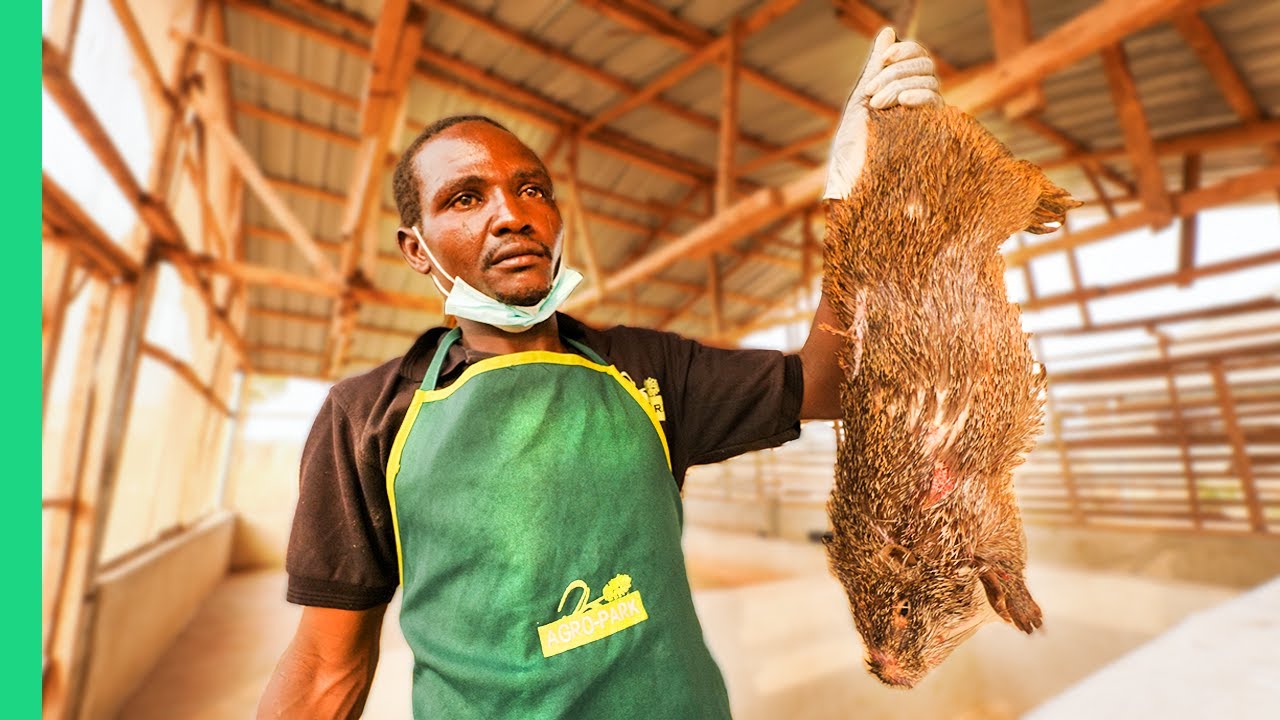 Nigeria is undoubtedly the largest market for bushmeat in Africa and African giant rats are a delicacy like no other.

For starters, bush rats are in high demand. They are a delicacy that is loved in the whole of Nigeria. Some people run successful bushmeat farms stocked with these rats.

The giant rats are also known as grass cutters are trapped and hunted down by a group of villagers whose main economic undertaking is this. Others rear these rats for sale and their farms are never a dull scene every day as customers troop in to get their favourite meal.

The rats have a close semblance with a porcupine but lack spikes. They are the types that are reared in some farms in the villages. The business is profitable that they are breeding them is an important agricultural lesson that farm owners have to master.

In one of the farms, the owner has stocked hundreds of rats for sale. They fetch a good price here more than any other animal, at least those allowed by the government for consumption. It costs $26 for a single rat while a chicken will cost at least $3.

Today, rearing rats in Nigeria is a profitable business. It is known as grasscutting farming. It is a multi-million-dollar empire across Nigeria. The demand for rats on the plate is insanely high.

The high prices of these giant rats reared in farms is compounded by the slow maturity of the rats. They take between two to three years for them to fully mature. They are fed on grass once every day.

But why do people love eating the rat? It is reportedly a “white meat” with high protein content and low cholesterol.

The first process involves skinning the rat which is pretty huge. From a distance, it passes for a rabbit. When you edge closer, you realize this is a giant rat from the bush or one reared on the farm.

It is boiled together with red onions and seasoning from favourite spices. The rat’s head is part of the meat. It is also boiled until it is tender and then it is deep-fried. Red onions, tomatoes and chilli are blended and fried with hot oil to make a good sauce. Some basil leaves are sprinkled over the sauce.

The rat meat is fried until golden crispy and the piece are removed and placed into a pan with the boiling chilling sauce for a tasty flavour. It has a unique flavour and tastes like chicken.

African giant rats are a delicacy among all the tribes of Nigeria. It doesn’t matter if they live in the city or the villages but the fact is that they have enjoyed this meal somewhere in Nigeria.

By law, rat-eating is allowed. Breeding them is allowed as well as hunting them in the forest and bushes which happen in the villages. Rat farms take care of the needs of those who may not get time to go hunt. Besides the African giant rats, bush meat-eating in Nigeria is prolific.

A walk through Nigerian markets leaves you in utter surprise and shock at the same time as traders display their goods some alive, some dead. What’s mind-blowing is that bushmeat is in high demand; it is part of the Nigerian culture and has remained so for decades.

Talking of bushmeat in Nigeria, take into account that there is legal bushmeat and illegal wildlife hunting, all of which find their way into the market and finally on a plate somewhere in this West African country.

Traders are aware of what they are selling. They know what has a high protein content which fetches a higher price in the market.