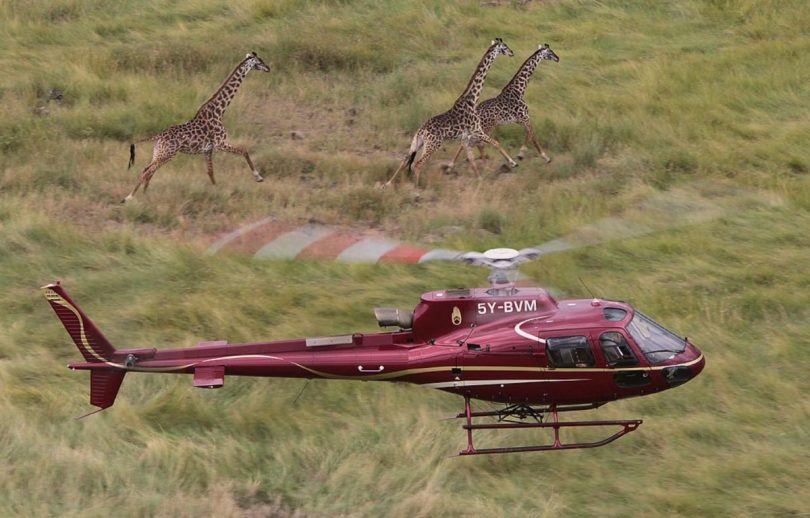 Geraldine Brooks in her wisdom says leaving the curtains open, brings the magnificence of the earth closer. That explains the new phenomenon which is helicopter rides in Kenya.

Kenya is unquestionably at its most breathtaking from a helicopter view because of its extraordinary scenery, natural wonders, and abundance of wildlife.

Airborne Kenyan tours are among the most intriguing things in an African safari. You can attribute it to the incredible natural beauty and breathtaking sceneries in Kenya.

Chopper rides are now a shot at perfection and paradigm shift too in adventure. Top the energising wildlife-infested savannahs, there is sumptuous moonlight meals and private nature hikes.

A caveat though. This type of safari adventure is for well-oiled pockets. 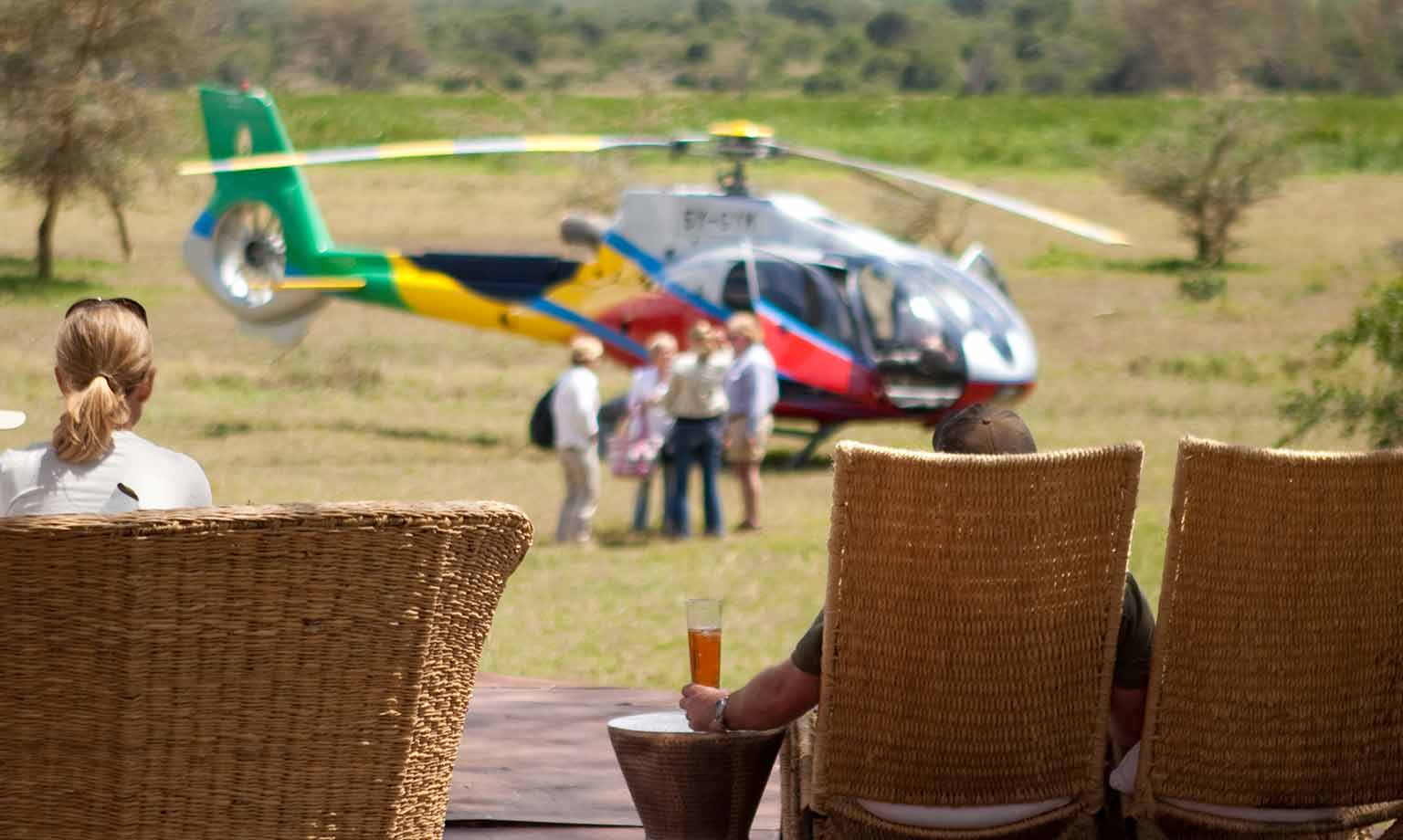 Helicopter rides in Kenya. Photo by The Safari Collection

How Much Does a Helicopter Ride Cost in Kenya?

This sector is proving to be a goldmine for tour companies some of which have reasonable package for several-days chopper trip to various destinations. For instance, UK-headquartered Heli Safari Tours has an eight-day Mt. Kenya Helicopter Safari tour for $11,244 (£9,795) per person sharing.

Where does it fly you for eight days? Well, to some of the scenic points in Kenya.

Be prepared to be amazed, enthralled, and totally entertained. Then there is Red Savannah, with ultra-luxe safari excursion for extremely daring thrill-seekers. The award-winning, U.K.-based travel firm specialises in custom-designed journeys and private villa experiences across the world.

What is The Best Time for a Helicopter Ride?

The best time for helicopter rides in Kenya is between 1 pm and 3 pm. You get better aerial photographs at this time when the sun is directly overhead.

Safari aficionados can travel with the outfitter and discover Kenya’s breathtaking scenery, unmatched wildlife, and most famous locations.

The voyage promises to astound visitors at every turn. It also provides a bird’s-eye view of the many remarkable contrasts of East Africa’s distinctive heartlands, including the Masai Mara, Samburu, and Turkana.

Amazingly, the chopper ride takes you beautiful but unexplored places in the country among them northern Kenya. It hovers to Lake Turkana, an oasis in a wonderfully lonely area of the Great Rift Valley.

This Turkana region is typified by bizarre scenery and are best accessed by helicopter. After this, visitors to the five-tent Koros Camp can explore neighbouring ancient rock art sites.

They also enjoy quad biking in the local sand river beds, and see the biggest permanent desert lake in the world, Lake Turkana. It is often referred to as the “Jade Sea” for its distinctive turquoise appearance when viewed from a distance.

Is a Helicopter Ride Worth It? 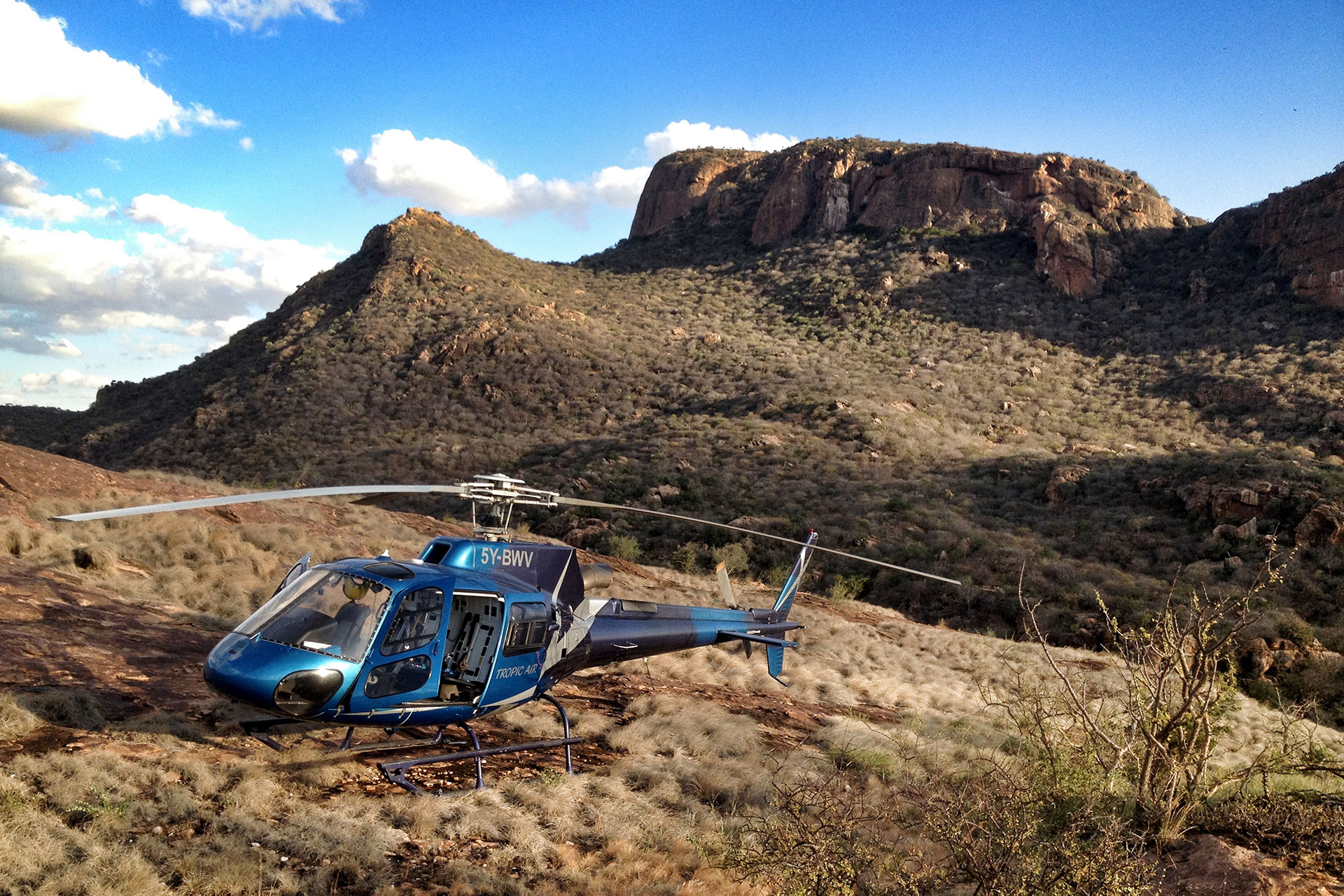 Helicopter Safari. Photo by The Safari and Conversation Company

Although helicopter rides in Kenya are pricey, there is always a battle of thoughts asking whether you should book a chopper tour. The answer is you should go ahead and book it because it’s unquestionably worthwhile.

If you enjoy aerial vistas, you have one more reason to schedule a tour on a helicopter. Once you get on it, you’ll definitely fall in love with the Kenyan scenery and grandeur aerial views.

How Fast do Helicopter Tours go?

Most helicopters typically travel at a speed of about 140 knots. This translates to roughly 260 km/h or 160 mph. The size of the helicopter and what or who is on board at any given time are two factors that determine the average speed of the aircraft.

Helicopters can fly at faster speeds than most people realise, despite the fact that they aren’t particularly known for their speed. The type of helicopter it is, which can include both civilian and military helicopters, also has an impact on its speed.

Military helicopters can be quite large because they are utilitarian. They are used for transport, and combat, thus their speeds are much higher.

Further, they have an additional fuel capacity and powerful motors that enable them to travel at high speeds. For civilian choppers, you can always pick one based on your needs in terms of capacity, mileage and speed.